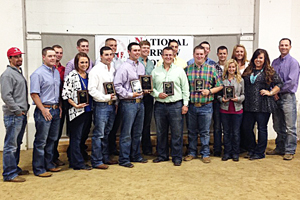 The Texas Tech University livestock judging team on Tuesday captured first place, and three Red Raiders finished in the top 10 individually, at the National Barrow Show in Austin, Minnesota, considered by many as the “World Series of Swine Shows.”

The Texas Tech team won the swine evaluation event by four points over second-place Iowa State and also tied for first place in the reasons division. They were led by three students finishing in the top 10: Nick Fitzsimmons from Vail, Iowa (second), Jacob McKillip from Lafayette, Indiana (ninth) and Kylan Carson from Olton (10th).

“This is only the second time that Texas Tech University has won the Barrow Show in its long history. I am proud of these students’ performance and the manner in which they represent their university,” said Ryan Rathmann, the team’s coach, an assistant professor and the John W. and Doris Jones Professorship holder in the Department of Animal and Food Sciences.

“This is an exceptional team that consistently excels both in and out of the classroom. In addition to their achievements, the students on the team gained invaluable exposure to progressive swine production systems across the Midwest on this trip and extended their network of contacts in the swine industry.”