The movie is about rare, young individuals who are making a career out of farming and ranching. 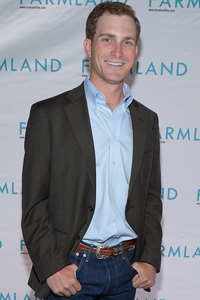 Texas Tech alumnus Brad Bellah on the red carpet at the premiere of "Farmland." (Photo courtesy of Farmlandfilm.com)

Brad Bellah always knew he’d be back home one day, operating the family ranching and farming business in Throckmorton County.

The sixth-generation cattle rancher didn’t think, however, it would be right after his 2009 graduation from Texas Tech University with a bachelor’s degree in agricultural communications.

“That’s just how it worked out and it’s been a good deal so far,” Bellah said. “(My parents) always had a place here for me but they wanted it to be my decision as to when and if I came home. But I knew there would always be a place and there was never any pressure.”

By joining the family business at such a young age, however, the 27-year-old-Bellah became part of a select group of young individuals trying to forge a career in a profession that is not only aging – the film says the average age for a farmer in America is 60 – but lacks all the glamour or promise of wealth that engineering, business or the oil and gas industry offers.

Yet, farming and ranching remains essential to the good of the country, and Bellah was recently featured in the documentary film “Farmland,” which was directed by Academy Award-winner James Moll. The film shows the successes and struggles of several young farmers and ranchers who represent the next generation of food and textile producers in the United States.

“I really, really liked it and thought that the producers of the movie did a really good job of depicting things that people who have decided to farm go through,” said Erica Irlbeck, an assistant professor of agricultural communications at Texas Tech. “It’s not easy to just one day say you’re going to start farming. I thought it was a very accurate representation of what farmers and ranchers go through, and the thing that I like is they had a lot of different geographic areas represented.”

In addition to Bellah’s ranch in Throckmorton County, located approximately 180 miles east of Lubbock, the film also featured farmers and ranchers in Pennsylvania, California, Nebraska, Georgia and Minnesota, all with their unique challenges to making ends meet.

Bellah, like most farmers and ranchers, grew up in the family business, which has holdings in both Throckmorton and neighboring Haskell counties. Bellah’s family business operates about 75 percent ranching, with between 5,000 and 10,000 head of beef cattle depending on availability, and 25 percent cultivation. He said it’s much different, however, when you have your own money on the line.

“It’s always rewarding with the markets and the decent weather we’ve been having,” Bellah said. “It’s even been rewarding through the drought that we’re still in – hopefully on the tail end of it. There’s definitely been some changes and when you grow up there’s going to be some changes. You see different sides, the good side.” 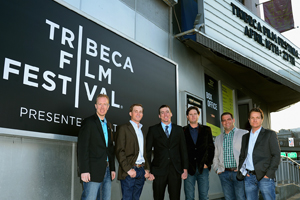 Bellah, second from left, along with other cast mates at the Tribeca Film Festival. (Photo courtesy of Farmlandfilm.com)

In terms of the movie, Bellah said he was pleasantly surprised with how it turned out, knowing only that the film crew asked to come out to his ranch to watch him work without hinting at the tone the movie would take. The drought was a big part of the movie that Bellah talked extensively about.

“I was very pleased with the final result,” Bellah said. “It told my story perfectly, but my story is the same as a lot of 20-somethings who return to the family ranch. We all have a lot of commitment there, and I think the movie told our story right.”

Irlbeck said she sees numerous students in her classes who come from farming backgrounds, and that the number of those who earn a degree and return to the family business is increasing somewhat. Those who don’t have the background and try to get into farming or ranching, however, face a large uphill battle.

In addition to buying or leasing land to farm or raise livestock, there are input costs, such as securing and operating equipment. Then, there’s the knowledge that must be gained that those who have a background in farming or ranching have instinctively.

“In the movie there was an example of the dad telling his sons to get out and go do something else,” Irlbeck said. “Be a doctor, be whatever. The sons ignored him and they all came back. A lot of times it depends on the family, and it depends on the kids, too.”

Irlbeck and Bellah agreed the film also did a good job exploring some of the controversies with farming and ranching, such as use of federally approved chemicals on crops vs. growing things organically, plus the issue of animal cruelty. 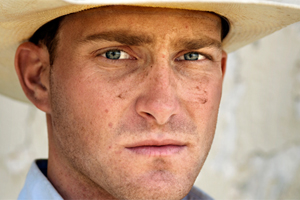 A photo of Bellah from the documentary. (Photo courtesy of Farmlandfilm.com)

“There are always bad players in every industry,” Irlbeck said. “Ours is no different. The movie talked about the treatment of the animals, caring for them and things like that. I was glad they included that message in the movie.”

Bellah said he was glad the movie showed the challenges farmers and ranchers face but also showed the rewards that can be had. He added it’s important that the movie connects with its viewers and everyone can relate to the subject being presented.

“At the same time, I think consumers are able to realize that all methods of agriculture are safe and reliable, and that they have choices,” Bellah said. “The American consumer has choices the rest of the world doesn’t have. I hope they recognize that and are appreciative of the choices that are available.”

For more information on “Farmland,” go to www.farmlandfilm.com.