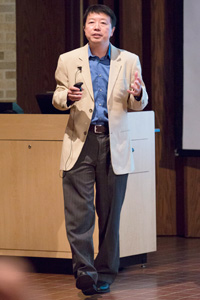 When most people in the world think of nuclear power, thoughts of Chernobyl or the Fukushima plant in Japan damaged by an earthquake come to mind.

But professor Ning Li with the Xiamen University School of Energy Research in China told a group of Texas Tech University students and faculty this week of his and his school’s efforts to create viable, safe nuclear energy, and that essentially all sources of energy come from a nuclear reaction of some sort.

In his lecture, titled “The Power to Change the World – Search for Clean, Safe and Competitive Energy,” Ning presented his views on the evolution of power generation technologies, the rise and fall of primary energies (coal, natural gas, petroleum) and the energy hierarchy based on origin and transformation.

“It takes two or three decades for new technology to mature and saturate the market,” Ning said. “It is a good time to work on energy and power generation technology.”

Ning, who attended the University of California-Santa Barbara with current Texas Tech vice president for research, Robert V. Duncan, and the School of Energy Research at Xiamen University are working toward developing traveling wave reactors, which can convert material more efficiently into sustainable energy through nuclear transmutation without uranium enrichment or reprocessing.

Instead, the traveling wave reactor uses depleted uranium, natural uranium or spent fuel from light water reactors – Ning said there is enough outside the Paducah (Kentucky) Gaseous Diffusion Plant to power the U.S. for two centuries – to produce power. He said the fuel burns so deep and the reactor is cooled such that the technology is safer than nuclear technology used today.

The goal, Ning said, is to wean countries off fossil fuels such as coal and oil. His work has the backing of billionaire Microsoft inventor Bill Gates. 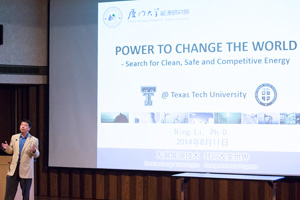 Ning Li presented his views on the evolution of power generation technologies, the rise and fall of primary energies and the energy hierarchy based on origin and transformation.

“If it takes off, it will reduce the need for coal very fast,” Ning said.

Ning has worked extensively in the field of nuclear energy, from his time at Los Alamos National Laboratory in New Mexico to helping start the Xiamen University School of Energy Research in 2007. At Los Alamos, he worked on developing nuclear coolant technology that would help accelerate fuel burn-off into nuclear waste, thus reducing the half-life of the nuclear fuel.

He is director of Asia development for TerraPower, a nuclear reactor design company in Washington that works with traveling wave reactors, and is a member of the expert committee for China’s State Nuclear Power Technology Corporation.

Ning has extensive experience in nuclear energy technology and fuel cycle research and development and has participated in several U.S. civilian nuclear programs.

In his energy hierarchy, Ning explains that energy is derived from two kinds of nuclear reactions – fusion and fission. Nuclear fusion ultimately resulted in fossil fuels, from which roughly 95 percent of the power used by the U.S. is derived. The rest comes from sources derived from nuclear fission.

Ning said another reason the world needs to explore safer, cleaner nuclear energy is the effect on the environment from the use of fossil fuels, citing the increase in carbon dioxide gas, or greenhouse gas, causing global warming.

“We already live in the current of nuclear energy use because everything we use is nuclear based,” Ning said.