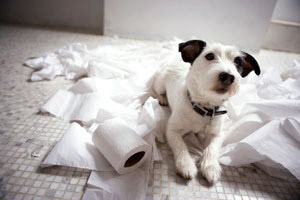 The product has been met with tremendous success by pet owners who were on their last legs in trying to curtail bad behavior in dogs.

In a sense, John McGlone was just like any other pet owner a few years ago. He simply wanted to keep his Cairn Terrier from barking incessantly.

Then again, McGlone is not like most dog owners in that he is a professor at Texas Tech University who just happens to specialize in animal welfare and behavior. And, in that capacity, he just happened to have a product on hand at his house from a previous research study called Boar Mate, an odorous concoction which helps farmers with swine breeding.

So, he gave one little spritz to his dog, Toto, and immediately the dog stopped barking. Right on the spot.

"It was completely serendipitous,” said McGlone, who works in the Animal and Food Sciences department of the College of Agriculture Sciences and Natural Resources. “One of the most difficult problems is that dogs bark a lot, and it’s one of the top reasons they are given back to shelters or pounds.”

Suddenly, an idea was born. After extensive testing and publishing of the results, and with funding help from Sergeant’s pet care products, Stop That was developed and hit store shelves under the Sentry pet products name about a year ago. It has been met with tremendous success by pet owners who were on their last legs in trying to curtail bad behavior in dogs.

“My dogs were instantly focused and silenced with one spritz,” said one product reviewer on Amazon.com. “It’s changed my life.”

Not only did the discovery of this product by McGlone come by accident, it came from a completely different species. 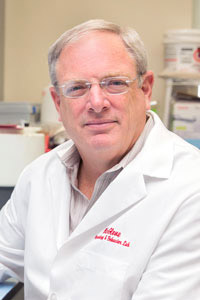 McGlone said Boar Mate contains a pig pheromone, defined as “substances secreted to the outside by an individual and received by a second individual of the same species in which they release a specific reaction.”

In this case, the pheromone produced is androstenone, which, when secreted by male pigs, is picked up by female pigs in heat and ready to breed. It is a foul-smelling odor for humans and also affects dogs through their olfactory system.

Androstenone is produced by pigs in their saliva or fat, but Boar Mate androstenone is synthesized in a laboratory. One spray of Boar Mate on Toto was all it took to set the wheels of experimentation in motion.

McGlone contacted a canine research site he had worked with on previous experiments, knowing this site had a wide array of adult dogs, both mixed and pure breeds. He also knew that about half of the 100 dogs there barked constantly and would be perfect for testing.

“It doesn’t mean it’s going to work on a lot of dogs just because it worked on one dog,” McGlone said. “It might have been the noise of the spray that stopped them and not the chemical.”

McGlone asked Sergeant’s to make several spray cans that had the androstenone in different concentrations and also made noise when sprayed. Testing then began. 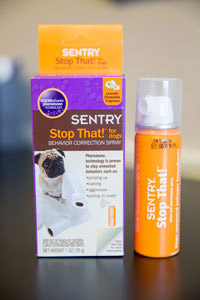 Stop That!™ for dogs

“We sprayed it in their nose or toward their head while they were barking … barking and jumping, running back and forth,” McGlone said. “This whole behavior stopped. You could almost see them thinking, ‘What was that?’”

McGlone and his group also tested the dogs to see if there were any physiological effects from the spray on the dogs, observing them for 10 minutes before and after being sprayed after outfitting the dogs with telemetry jackets and transmitters to monitor heart rate. The androstenone had no effect on the dogs’ heart rates either before or after being sprayed.

Having shown its effectiveness, McGlone was able to classify androstenone not only as a pheromone but also as an intermone, a term developed by him and his team that refers to a product that is a “pheromone in one species and has a behavioral effect in another species, but we do not know if it is a pheromone (naturally produced) in the other species.”

McGlone said other tests on the product have also been conducted outside of Texas Tech and that the success rate is more than 90 percent. He also added in his paper on the subject that “additional research to determine the length of the effects of pheromones and the effects of repeated applications remains to be investigated.” 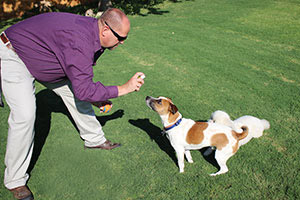 Stop That!™ is intended to be used as a training tool.

Having shown its effectiveness in curtailing bad behavior, the product was developed and hit the stores as Stop That for both dogs and cats, available at PetSmart or through Amazon.com. But, McGlone warns, it’s not an end-all, beat-all to stopping dogs from barking, as the effects last just about a minute.

“If you continue to spray the dog again it will stop,” McGlone said. “If you (show the can) they will stop. It’s best used as a training tool rather than a circus act to stop animals from doing what they’re doing.”

McGlone said he continues to experiment with other pheromones as well to see if any of those might have the same effect. It’s not limited to pig pheromones, either, as he is testing those from dogs, cats, pigs and horses.

For now, though, there are quite a few pet owners relieved to be able to stop their pets’ bad behavior and not have to resort to giving them up, thanks to Stop That.