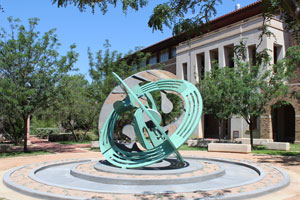 The piece, titled “Astrolabe,” was created by sculptor Owen Morrel of Peconic, New York, who was commissioned from 38 applicants. His work has been acclaimed throughout Europe and the United States, with commissions in Canada and Asia.

“In my early sculptures, I wanted people to discover a new view through the introduction of an anomaly or puzzle into the matrix of expectations,” Morrel said. “’Astrolabe’ carries the theme of those early sculptures; forcing the viewer to discover something new about the act of perception or perhaps to revitalize the act of seeing through the inducement of disorientation.”

Although Morrel drew inspiration for the circular structure from the ancient scientific instrument, the astrolabe, it is not a literal depiction of the tool, leaving room for interpretation by the viewer.

“Unlike the original astrolabe, which was an instrument designed to orient navigators to the stars, in this instance ‘Astrolabe’ asks the viewer to be active and walk around the piece in an effort to discover what is happening and how it works formally and visually, not necessarily to solve a riddle in a linear and rational fashion,” he said.

The sculpture is surrounded by a mound of drought-tolerant plants and hardscape that ascends in a spiral pattern, providing a pathway to the art piece and creating a metaphorical reference to an image with broad scientific implications.

The $242,000 project is located in the circular courtyard west of the Experimental Sciences Building (8th Street and Canton Avenue).

The TTU System's Public Art Program was initiated by the Board of Regents in 1998 as an investment in the campus environments at each of its institutions. Through the program, public artworks are funded using one percent of the estimated total cost of each new major capital project. Since then, 98 items created by some of today’s leading artists have been added to the TTU System’s campuses.