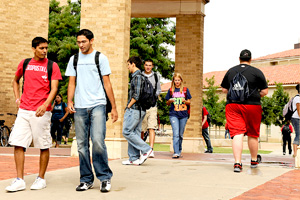 Texas Tech University set a record for summer enrollment with 11,605 students enrolled as of the 15th day of classes (June 24), the official reporting day. The number exceeds the previous mark of 11,316, set in 2012.

Annually since the fall semester in 2008, Texas Tech enrollment figures have risen, including record spring numbers each of the last three years. Texas Tech President M. Duane Nellis credits the efforts of the university community for the demand on enrollment.

“The increases in attendance the last several years can be attributed to an aggressive recruiting campaign by our admissions staff, our administration and faculty attending recruitment events, and our students and alumni sharing their experiences with friends and family at home,” Nellis said. “Our success in attracting the top students across the state and beyond is a team effort, and I’m proud of the hard work everyone continues to exhibit on behalf of Texas Tech University.”

Texas Tech’s enrollment surge has continued, despite the rising average costs of higher education nationally. Texas Tech was listed as one of the “25 Best College Values Under $30,000”, according to Kiplinger Personal Finance’s spring magazine. The university was the only Texas institution listed as tuition and fees for 24 credit hours was $7,517 for undergraduate students the previous academic year.

The summer semester is one of three consecutive semesters in the legislative “base” period. Funding for higher education in fiscal years 2016 and 2017 will include on enrollments in 2014 summer and fall semesters and the 2015 spring semester.

At its current pace, attendance at Red Raider Orientation reflects record numbers, while applications and admissions for the fall are also surpassing previous totals. Official fall numbers won’t be available until late September.