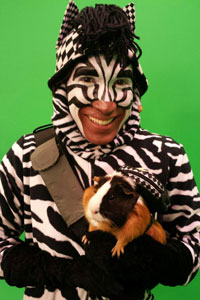 After receiving his third nomination, Scott Gryder has won his second Daytime Emmy Award for the children’s television show, “Green Screen Adventures.” Gryder is thankful to receive this award and said it was his experience at Texas Tech University that gave him the tools to become a well-rounded performance artist.

“Along with this thorough education, the encouragement from professors and staff gave me the confidence to believe in myself as an entertainer and a creative person in the world outside of Texas Tech,” Gryder said.

“Green Screen Adventures” performs the stories provided by elementary school students in order to bring their writing to life and promote literacy. Gryder serves as an actor, puppeteer, singer and makeup artist for this television show.

“I actually never had the intention to work in television,” Gryder said, “but with the broad range of theatrical training I received at Texas Tech, I comfortably fit into this performance genre.”

Along with his work on “Green Screen Adventures,” Gryder has become an active member in the cabaret circuit of Chicago. He has performed a monthly one-man show, “SIMPLY SCOTTY,” for four years, along with continually joining other concert and theatrical performances around the city.

Gryder graduated from Texas Tech in 2005 with a bachelor’s degree in theater. Housed in the College of Visual and Performing Arts, the Department of Theatre & Dance trains and educates students through various specialized programs, and prepares students for careers in both practice and pedagogy.

Gryder said families can visit www.greenscreenadventures.tv to learn how to write and submit their own original stories to the television show.

Getting to Know Scott Gryder

Maedgen Theatre. There's a certain “anything can happen here” energy there. When working in a design practicum class, painting a flat or a set piece in the wings; when rehearsing a dramatic scene in the house, running lines with another actor; and onstage, during rehearsal or belting out a Broadway tune during a performance; that's where I felt most present and alive.

The Masked Rider. I’ll always remember being moved to tears by the palpable freedom and drive that the rider and horse embodied when they took to the field. It was inspiring.

I love the Red Raider family. There’s a network of theater professional across the country whom you can reach out to for information and support. Also, there’s a great comfort in knowing fellow Red Raiders are making their own way in the arts, and it’s a special joy to have them root for you as you follow your dreams as well.

I would say it’s my class ring because every time I look at it, I remember the strength in my training, but my memory is also sparked with a smile when I look at the collection of show shirts I still have hanging in my closet, marking the incredible productions I was so fortunate to be involved with while at Texas Tech.

Do it all. Audition. Train in multiple areas. Take voice lessons. Take dance. Stage-manage. Direct. Choreograph. Work behind the scenes. Build. Design. You may be afraid or hesitant to try some of these production aspects, and I was too, but I’m so glad that I have the experience in as many of these areas as possible. It’s not that I'm currently doing all of these things, but now I know and respect what it takes to make them happen. With that knowledge, I feel I can build stronger bonds with those I work with, and I feel more confident in my way around any performance space.