The win at the Reciprocal Meat Conference is the Red Raiders' seventh since 2003. 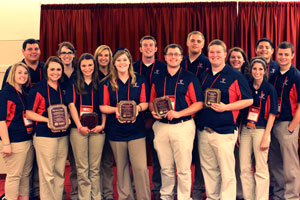 National champions for second year in a row.
Click to enlarge.

The Red Raiders entered two teams in the contest, sponsored by Hormel, finishing first and third against 27 other teams from the top meat science programs at 19 universities. Colorado State University finished second.

“The students who competed are extremely intelligent,” said Mark Miller, professor and San Antonio Livestock Show & Rodeo Distinguished Chairman in Meat Science. “Their performance at RMC was a great reflection of the high academic standards of Texas Tech’s Department of Animal and Food Sciences.”

RMC is an annual conference sponsored by the American Meat Science Association (AMSA), which brings together meat scientists and students from academia, industry and government. There were 850 registered attendees at the conference from 19 countries.

At the awards banquet, Deidrea Mabry was awarded the Distinguished Achievement Award. The award is designed to recognize and foster the development of young AMSA members who have demonstrated significant scientific skills in muscle foods research and technology that contribute to the animal products industry.

Another Texas Tech student, Bo Hutto, competed on the Iron Chef first-place team which was composed of 10 students from various universities. The team was given a mystery protein when they arrived at the conference and were asked to develop a product using a secret ingredient. Hutto’s team developed a chicken pot pie in a bowl made of weaved bacon. The competition was sponsored by Kraft Foods and the recipe will be featured on their company website.

Additionally, Texas Tech students displayed 19 research posters at the conference. Loni Woolley, a meat science graduate student, was inducted as the AMSA Student Board President, and Hutto was recognized as the South Region Director.