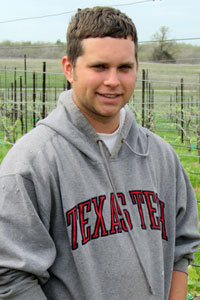 When Grayson Davies and his family became one of the first to start a vineyard and winery in North Texas, they named their product Arché (AR-KAY), Greek for “in the beginning” or “leader.”

Fifteen years later, the name still fits, especially for Grayson. He became the first graduate of Texas Tech University’s Viticulture and Enology (V&E) program in 2011 and has since helped his family’s vineyard in Saint Jo, Texas, grow into a full winery.

“We picked that name, because we were doing something new in the family, and we’re the first people in the area to do this,” Davies said.

The Davies family bought the old, abandoned vineyard in 1999, planted a variety of vines, and then later expanded into a winery and tasting room in 2007. “Wines as big as Texas” became their tagline due to the bold flavors they’ve created. One of which is their 2012 Vintage Roussanne that Davies describes as “full-bodied with almond caramel and dried apricot aromas with a good mouth feel, leaving a lingering finish.” This unique wine recently was awarded for its bold taste at the San Diego International Wine Competition, winning platinum designation after being blind-tasted by professional sommeliers.

“Out of about 3,000 wines, only around 20 to 30 wines were chosen for the Platinum award. Out of those that won platinum, my wine was the only Roussanne that won,” Davies said. “So that was a really cool achievement, because there are not many wineries that win that award.” 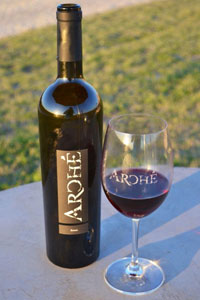 Although Davies initially pursued a career in business, his taste and love for a nice glass of wine led him to Texas Tech with a group of other students pursuing careers in viticulture and enology. After completing his general coursework at North Central Texas College, he began his V&E courses in 2009. He was first to finish his required coursework and became the first Texas Tech V&E student to walk across the stage in 2011.

Ed Hellman, professor in the V&E program, recalls Davies as an excellent student who always participated in class.

“Grayson was an energetic and inquisitive student who was always involved in class discussions and asked excellent questions,” Hellman said. “He was often looking for practical applications of viticultural principles that he could apply back home in his family's vineyard and winery.”

Since beginning the program in 2009, Texas Tech remains the only university in Texas with a four-year undergraduate V&E program. The program continues to grow by adding new classes, internship opportunities and also teaching classes in Fredericksburg, Texas where its teaching vineyard is located.

Davies says he is “thankful for this program and the professors,” especially since the wine making business is growing in Texas. With over 200 wineries in Texas, Texas Tech’s V&E program is as popular as it’s ever been.

“We are very proud to claim Grayson as the first graduate of Texas Tech's Viticulture and Enology program. I was confident that he would quickly apply his education to take the family business to the next level,” Hellman said. “His recent platinum award at the San Diego International Wine Competition is clear evidence of his success.”