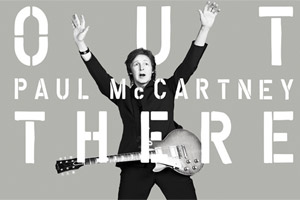 Paul McCartney's Lubbock debut will be delayed a few months.

The rock ’n’ roll legend announced on his website Monday he's pushing back the start date of the U.S. portion of his "Out There" world tour. For Lubbock fans, that means his Saturday (June 14) show at United Supermarkets Arena, which originally was scheduled to kickoff the American leg of the tour, is now scheduled for Thursday Oct. 2.

McCartney confirmed on his website he will, however reluctantly, heed medical advice to rest up just a bit longer to fully recuperate from the virus that forced the postponement of his recent dates in Japan and Korea.

"I’m sorry but it’s going to be a few more weeks before we get rocking in America again," McCartney stated on his website. "I’m feeling great but taking my docs' advice to take it easy for just a few more days. Look forward to seeing you all soon.”

The "Out There" world tour resumes July 5 in Albany, New York and the June 14-26 shows in Lubbock, Dallas, New Orleans, Atlanta, Jacksonville, Nashville and Louisville have been rescheduled to October.

Tickets for the original June dates will be honored for the new dates detailed below.