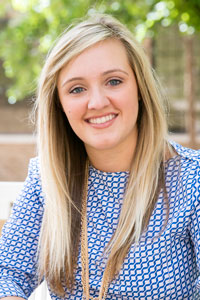 The Texas Tech Whitacre College of Engineering has selected Amber Helm as the recipient of the 2014 McAuley Distinguished Engineering Student Award.

This award, provided by members of the Whitacre College of Engineering Dean’s Council, is named in memory of James A. McAuley, an active member of the Dean’s Council, and a Texas Tech Distinguished Engineer.

After completing a study abroad program at the Texas Tech campus in Seville, Spain, she began her sophomore year as an Honors College mentor and joined two student organizations: Alpha Omega Epsilon (A.O.E.) and the Engineering Ambassadors. A.O.E. is an international professional and social engineering sorority that strives to encourage self-confidence, professionalism and motivation among females in engineering. As an Engineering Ambassador, she assisted with college events, prospective student visits, outreach activities in the community and recruiting for the college.

During the summer after her sophomore year, she worked for Encana Oil and Gas in Plano, where she was a drilling engineer intern. This experience with drilling rigs and the mechanics and procedures for drilling deep, high pressure, horizontal wells piqued her interest in the upstream oil and gas industry. The following summer she worked for Anadarko Petroleum Company in Denver, in the field and office as a production intern.

"It took friends and family to encourage me and help keep me grounded when I wanted to give up." - Amber Helm

Helm began her junior year as event coordinator for A.O.E., a position that allowed her to gain leadership experience and build connections on campus. This year she was selected as a delegate to attend the A.O.E. international convention in Salt Lake City. She also became involved with the American Institute of Chemical Engineers, the Texas Tech Society of Petroleum Engineers, and the Texas Tech Tau Beta Pi Engineering Honor Society.

Helm currently is ending her year-long tenure as the president of A.O.E., a position that she said she has enjoyed because she has had the opportunity to encourage younger students, make lifelong friends and see the organization grow nearly three times larger.

Reflecting on the challenges of a demanding chemical engineering program, Helm admits, “It took friends and family to encourage me and help keep me grounded when I wanted to give up. It took professors, classmates and my sorority sisters to keep me on the right track and focused.”

Helm has accepted a full-time position with Anadarko as a production engineer in Kermit, and will begin work after graduation. She plans to remain involved at Texas Tech after graduation as an alumnae advisor to A.O.E., a campus recruiter for Anadarko, and member of the Texas Tech engineering young alumni organization, Young Guns.