Advertising Team Advances to Final Round of National Competition

The team of Red Raiders, who already won the district round, developed a campaign for Mary Kay Cosmetics. 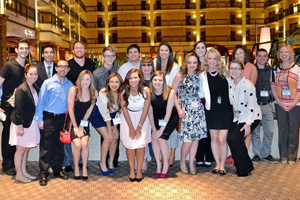 After their first-place win in the district competition, Texas Tech University’s student advertising team, Bullet Advertising, ranked second of the eight teams in the country that will be competing in the final round of the 2014 American Advertising Federation’s National Student Advertising Competition (NSAC) in Boca Raton, Florida.

Bullet Advertising competes in NSAC’s final round in May against schools from all over the country such as the University of Texas, University of North Carolina and Purdue University.

“It really just shows that Texas Tech is full of talented individuals,” said Steven Pence, account executive. “I was so proud of our team and everything that we had produced and the feeling was just amazing.”

Each year NSAC is sponsored by a client who provides a case study outlining its current advertising situation. From there teams research the product, identify the problems and develop an integrated communication campaign.

Texas Tech’s 19-member team created a campaign for this year’s sponsor, Mary Kay Cosmetics. The campaign hopes to attract a younger clientele to the brand.

“This year, I knew there was something special with this group,” said Shannon Bichard, advisor. “There were so many students with really great talents and all the parts came together perfectly.”

The team is compiled of students from any college within the university. Past teams have worked with high profile clients such as Coca-Cola, JCPenney and Yahoo.