Max Miller is among many long-time employees honored for various lengths of service. 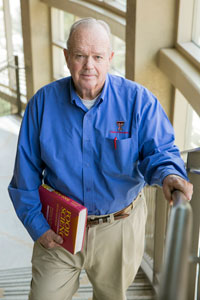 When Max Miller, associate professor in the Department of Animal and Food Sciences, came from Brownfield to Texas Tech in 1955 to begin his undergraduate studies, the only traffic light between there and Lubbock was at 19th and University (which then was called College Avenue) and 34th Street was the southern-most edge of town.

Miller was recognized for 50 years of service to Texas Tech University at the 2014 Length of Service Awards on Thursday (April 3). Presented annually, the awards recognize staff and faculty members for their employment longevity with the university.

The ceremony honored 271 employees, ranging from 15 to 50 years of service. See the full list here.

“In 50 years of service to Texas Tech, Max has consistently delivered outstanding classroom instruction,” said Michael Galyean, dean of the College of Agricultural Sciences and Natural Resources. “I’ve always been impressed by how our graduating seniors truly appreciate the fact that Max challenged them to become better students and to work hard to learn material that would help them in subsequent classes and ultimately on the job.

Galyean said equally important to his contributions in the classroom, Miller really cares about his students beyond the classroom. He has helped hundreds of students find great jobs in the food industry, many of whom have gone on to become industry leaders.

“Max Miller is a great teacher, and I’m proud to have him as a good friend and colleague,” Galyean said.

When he first began teaching in 1960, Miller would take his lab students to the Dairy Barn to educate them about inspection of dairy facilities. He has since taught everything from beginning dairy and food science classes, to food microbiology and food chemistry, food analysis, fruits and vegetables processing and the “field trips” class still offered today.

“In the fall the seniors go each Monday to tour a food plant in the area,” Miller said. “Then one of the students will give a talk over what they learned there. The number of food plants around here would really surprise you.”

Miller says his greatest pleasure in being a professor at Texas Tech is helping students get good jobs and watching them progress. Many students have said that Miller’s food science class was the hardest class they ever took, but they also say he was a professor that really cared. In fact, Miller gets calls almost nightly from former students checking in to see how he and his wife Roma are doing.

“Dr. Miller is a great example of a person who has had a global impact without traveling the world,” said Michael Orth, chairman of the Department of Animal and Food Sciences. “His teaching and mentoring of students, along with his efforts to secure positions for them after graduation, has led to Texas Tech graduates making significant and lasting contributions in the food science industry nationally and internationally.”

Miller said his most interesting research contribution was a cheese he developed in 1960. His “jalapeno pepper-flavored pasteurized processed cheddar cheese” was popular years before the industry started to sell “hot” cheese. 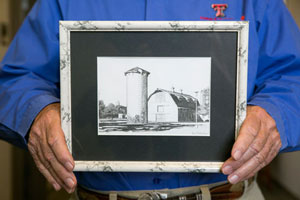 “I wasn’t very smart,” he said. “Instead of getting a patent on it, I gave it to the dairy industry department and food science club so they could make cheese when they needed to make money. They could make a batch and sell it, and it was gone in a hurry.”

But Miller’s most lasting legacy will likely be the two scholarship endowments generated in relationship to him and his family.

The Max and Roma Miller Scholarship Endowment honors Miller and his wife. Its current balance of just more than $93,000 primarily comprises gifts given by alumni – hundreds of former students whose lives he touched in their college experience.

Miller’s two sons also graduated from Texas Tech, as his wife says, with “degrees they earned under their dad.”

Paul, the younger son, earned a bachelor’s in agricultural sciences/food technology in 1994 and is employed by Ecolab.

His older son, Sam, earned two degrees, in electrical engineering in 1988 and in agricultural sciences/food technology in 1990, and was employed by Frito Lay as a principal engineer until his untimely death in December 2013. The Sam Miller Endowed Scholarship in Food Science, which stands at $42,420, honors his memory.

In her comments for the Length of Service recognition, Stephanie West, Human Resources representative, said, “Dr. Max Miller truly exemplifies what it means to contribute to student success. It is our honor at Texas Tech University to celebrate the 50 years of commitment of this dedicated employee.”