Red Raiders, recognized for their military support, are first school in Texas and third in nation honored. 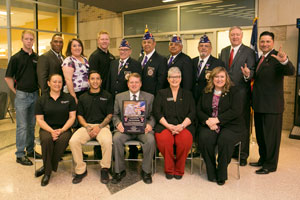 Texas Tech received this honor after participation in the National Day of Remembrance Roll Call, organizing the largest single gathering of Purple Heart recipients during a football game in 2013, and by providing service to wounded warriors through Military and Veterans Programs, Student Disability Services and the Veterans Administration.

“Texas Tech is honored to receive this designation from the Military Order of the Purple Heart,” Texas Tech President M. Duane Nellis said. “The gathering on our campus last fall of hundreds of Purple Heart recipients was a privilege for the university and gave us a brief moment to thank them for their sacrifices for our freedoms. At Texas Tech, we work diligently to ensure our veterans, current military personnel, and their families are afforded the opportunity to extend their education.”

James R. Berg, state commander for the Department of California, Military Order of the Purple Heart of the U.S.A., Inc., and national coordinator for Purple Heart Entities, recognized Texas Tech in a letter for being the first Purple Heart University in Texas and as a national leader in recognizing and commemorating our nation’s veterans.

Texas Tech’s continuing actions in promoting veteran’s issues and assisting wounded warriors and their families illuminate the appreciation and reverence towards those who have sacrificed so much to protect the freedoms this country holds so dearly, Berg wrote.

“Being named a Purple Heart University is truly an honor for Texas Tech,” said Chancellor Kent Hance. “As one of only three universities in the nation with this designation, Texas Tech has a long history of appreciation and support for active duty military, veterans and their families, and is grateful to serve these brave heroes who have made tremendous sacrifices for our country.”

Along with the university’s designation, the following individuals received awards for their work for veterans at Texas Tech:

“Texas Tech becoming the first Purple Heart University in Texas is truly an honor,” Munoz said. “We have worked diligently to ensure that those who have served our country have access to a high-quality, military-friendly and affordable education. This recognition is further testament to said work, and Texas Tech’s ongoing commitment to achieving new levels of excellence in all it undertakes.”

Commander John Murdock of the Military Order of the Purple Heart South Plains of Texas Chapter 0900 awarded Texas Tech as well as the individual awards today at the Stars and Stripes Military, Veteran and Family Lounge in the Student Union Building basement.