Texas Tech alumna’s safety stand-up soars on social media and earns her a seat on ‘Ellen.’ 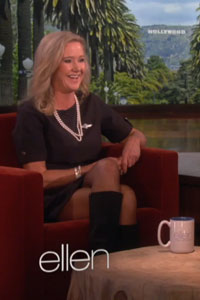 “Can I pretend to have your attention for just a few moments? My ex-husband, my new boyfriend and their divorce attorney are going to show you the safety features of this Boeing 737-800 series.”

The Southwest Airlines cabin erupted into peals of laughter as Martha “Marty” Cobb rolled out her pre-flight routine. While taxiing down the runway destined for Salt Lake City, passengers were treated to the Texas Tech University alumna’s tongue-in-cheek safety demonstration that had them rolling in the aisle.

What started as just another day in the air with a friend recording Cobb’s pre-flight announcement became an Internet sensation within days of posting it – once her children showed her how to get the clip off her phone and onto YouTube, that is. Her video (click here) has almost 11 million views to date, and the three-minute safety stand-up earned Cobb a chance to meet her personal hero, Ellen DeGeneres.

“It’s a huge dream of mine to meet Ellen,” Cobb said. “Everybody loves her. I admire her on so many levels. We all have our struggles, but she can make you laugh and cry in a one-hour segment. She’s a good person, and she gives back. It was really the most unbelievable experience.”

Her daughters, Haley and Hagen Parkman, 24 and 20, attended the taping with Cobb. Her son, Heath, 23, could not attend because of testing at Tarleton State University.

Based in Houston and living in Dallas, Cobb’s roots run deep in Lubbock. A graduate of Monterey High School and Texas Tech, Cobb earned a bachelor’s degree in restaurant, hotel and institutional management before settling down and starting a family.

“Lubbock is where my heart is,” she said. “I love the people there. I lived there from the time I was born to about six years ago, and I raised my kids there. I used to tell everybody – I did real estate before this – I used to say ‘Lubbock may not be the most tropical place on Earth, but there’s always Southwest. You can always fly somewhere tropical.’ I just love it.” 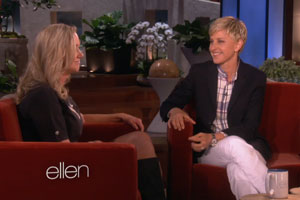 Cobb worked for Wentz Orthodontics and sold real estate in Lubbock before finally landing her dream job as a flight attendant. About seven years ago, friends employed by the airline told the single mother the time to apply was right.

“It’s the best job,” she said. “I couldn’t ask for a better job. We’re counselors, bartenders, housekeepers, therapists. I’ve gotten so many great letters from passengers. And, you know, not everyone’s going to Vegas to get married. I’ve had the honor of bringing fallen soldiers home to their families. That makes me want to cry thinking about it. We are able to touch so many people on so many levels. Traveling is just a stressful thing for people to do. Whether it’s comforting someone or making someone laugh, it’s the most rewarding job I’ve ever had.”

The video represents just a regular day in the air, Cobb said. The levity not only makes passengers laugh, but also they pay attention to the safety announcement. She likes to point out how to wear seatbelts low and tight across one’s hips like where Cobb’s grandmother wears her support bra. She also demonstrates where and when oxygen masks drop, and suggests which child passengers should save. Also, the fine for smoking in the lavatories is $2,000. However, passengers should have chosen another airline if they wanted to pay that much for their tickets.

After one passenger told Cobb that she should record her pre-flight announcement, she thought “why not.” She handed her cell phone to another flight attendant and let it rip over the public address.

“I couldn’t have imagined all this good that has come from it,” she said. “It’s been so humbling. It’s kind of fun to do up there, because they can’t throw anything at me, and they can’t leave. It’s location, location, location. I tell them, ‘you’d better laugh or you won’t get a Coke.’ The standup isn’t a goal that I’ve had. But I would be open to whatever. I’ve prayed a lot about it, and whatever happens, happens.”

Until then, Cobb said she plans to continue serving passengers and making people more comfortable in the air.

“I’m going to go pass out peanuts and clean up after 137 people,” she said. “Just keep doing what I’m doing. I have no expectations. I have training tomorrow so I can be a flight attendant for another year.”