In humorous fashion, Cosby gave students and mentors a dose of brutal honesty. 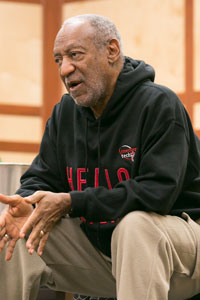 In anticipation of his keynote speech at the Mentor Tech Banquet, Bill Cosby spoke to a small audience of Texas Tech students, faculty, staff and administrators.

“Dr. Cosby not only is one of the most prominent figures in pop culture over the past 30 years, but he also is outspoken about the benefits and possibilities that come along with higher education,” said Texas Tech President M. Duane Nellis. “We are so fortunate to have someone of Dr. Cosby’s caliber visit Texas Tech University.”

Cosby centered his talk around the educational experience in college, encouraging students to work hard regardless of the material. He compared students who often are afraid of—and subsequently give up on—math to those same students’ interest in sports, where regardless of the rigor of the task at hand, young people will practice intensely so that they can do well on the field or the court.

“Practice putting your mind—and your heart—into each and every subject,” Cosby said. “That way you are putting yourself into something important. You’ve come to college to get an education, not to ease into your credentials.”

As students were given the opportunity to ask Cosby questions about education, he gave them a dose of brutal honesty about their own habits and expectations; at one point even calling out Cory Powell, director of the Mentor Tech program, and encouraging him to help students achieve their happiness.

“Happiness” became a central theme for the talk, as Cosby redirected questions about success and achievement toward the issue of the students’ happiness.

“As students we struggle with whether we’re in the right career, right major, are we going to make enough money,” said Jazzmine Reese, a junior from Houston. “And he said, if it makes you happy, then who cares. That’s the biggest thing I got from him.”

Reese and her roommate Helen Hailu, a senior from Dallas, said they share a love for Cosby and have each grown up watching the Cosby Show, reading his books and watching his recorded speeches. 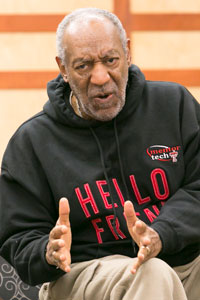 “I’ve looked up to him since I was a little girl,” Hailu said. “I have a different culture in my household, so I used to look at the Huxtables like that’s what I want my household to be like when I get older. Beyond the Cosby Show, I really idolize him what he’s done in African American history.”

Hailu and Reese said they felt so fortunate to have the opportunity to hear Cosby speak at their school, and despite the honesty, they wouldn’t have had it any other way.

“His no-excuses attitude is what I admire the most,” Hailu said. “It’s cool to see it’s exactly the same in person. It’s so genuine.”

Many of the students in the audience were first-generation college students and members of Mentor Tech, part of the Division of Institutional Diversity, Equity & and Community Engagement.

“It is our distinct pleasure to have such a profoundly accomplished professional as Bill Cosby, serve as key note speaker for the Annual Mentor Tech Celebration,” said Juan Muñoz, senior vice president for Institutional Diversity Equity, and Community Engagement and vice provost for Undergraduate Education & Student Affairs. “Dr. Cosby has provided inspiration to many generations and his conversations with our students highlights the increasing importance of education in our society.”

Cosby will conclude his visit in Lubbock with the Mentor Tech Banquet tonight (April 22) at the Lubbock Civic Center.