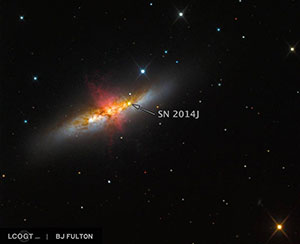 Researchers including a Texas Tech University physicist have intently studied the closest type Ia supernova discovered in a generation. The proximity to Earth could yield better understanding of this particular type of supernova that astronomers use to gauge distances in the universe and learn about its expansion history.

The research was led by Stockholm University and published in the peer-reviewed journal, Astrophysical Journal Letters.

With the help of a special spectroscopic camera developed by David Sand, an assistant professor in Texas Tech’s Department of Physics, the team observed  the supernova was a mere 12 million light years away from Earth. Finding one so close is important, he said, because astrophysicists use these stars to map distances in the universe.

“These type Ia supernovae are very important to astronomers in general,” he said. “They let us measure distances to within about 10 percent or so. These supernovae are very uniform, and the explosions emit the same intrinsic amount of light. So, if you think about the supernova being like a 60-watt light bulb, the light bulb in a room gives a brighter light intensity compared to a light bulb a mile away. They still give off the same amount of light though, so we’re able to figure out about how far away it is.”

Researchers used Sand’s FLOYDS spectrograph camera in Hawaii to view the supernova. Run by Las Cumbres Observatory Global Telescope Network and one of only two in the world, the cameras operate completely robotically and allow scientists to confirm supernovae earlier than ever before. 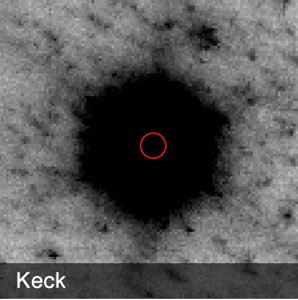 In the last six months, Sand and others have confirmed 30 different supernovae with the new camera.

The supernova was observed through the Intermediate Palomar Transient Factory project, which is a scientific collaboration with California Institute of Technology, Los Alamos National Laboratory, University of Wisconsin and several others. This automated survey of the night sky is dedicated to finding transient supernova events. The survey finds hundreds of new supernovae annually, and scientists here try to understand what types of stars become which types of supernova.

Sand said type Ia supernovae may begin as a carbon/oxygen white dwarf star that feeds off a neighboring normal star. Once the white dwarf star accretes enough material to reach a mass that’s 1.4 times the size of our sun compressed into a ball about the size of Earth, it becomes unstable and explodes into a supernova in a process that still isn’t fully understood.

Because they tend to explode at nearly the same mass and luminosity, they make excellent guides for judging distances.

However, Ariel Goobar from the Oskar Klein Center at Stockholm University, said evidence shows this particular supernova may have formed differently. Goobar and collaborators used pre-explosion images of the region of the M82 galaxy where the supernova went off, both from the Hubble Space Telescope and from the Palomar Oschin Telescope, to search for a star in the location of the explosion, or possible earlier nova eruptions.

The lack of pre-explosion detections suggests the supernova may have originated in the merging of compact faint objects, such as two white dwarf stars.

“Until very recently, the leading model for standard candle supernovae was thought to include a companion star from which material was stripped by the white dwarf until the accumulated mass could no longer be sustained by the outwards pressure, leading to a runaway thermonuclear explosion,” Goobar said. “The observations of this supernova are challenging for this theoretical picture.” 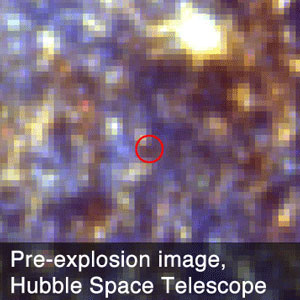 Three scientists won the Nobel Prize in Physics in 2011 after they used type Ia supernovae to document the universe not only is expanding but also the expansion process is accelerating.

The acceleration phenomenon is called dark energy, and Sand said he believes by studying closer type Ia supernovae will lead to better distance-judging in the universe as well as a better understanding of the dark energy phenomena.

“If we can judge distances better than the plus-or-minus10 percent or so, I think this will lead to uncovering the details of dark energy we still need to understand,” he said. “We didn’t even know about dark energy until a few years ago. It’s almost like the universe is going to fly apart. Right now, there’s no good physical model or explanation for dark energy.”

The good news is the supernova’s close proximity to our planet, Sand said. The bad news is that astronomers didn’t catch the supernova explosion until eight days after it happened – a fact they realized by studying data from amateur astronomers.

Also, it lives in the M82 galaxy, which is a dusty place due to the high number of local star formation. Because of the dust, the supernova wasn’t as easy to see, Sand said.

“The dust is interesting because all supernovae have some dust,” he said. “But there are worrying hints that dust works differently in galaxies other than our own. We see these worrying details once in a while when we’re looking at external galaxies. But it appears we may not understand dust that well.”

For a copy of the report, contact John Davis.