Preservation of aquifer is extremely important to future water availability. 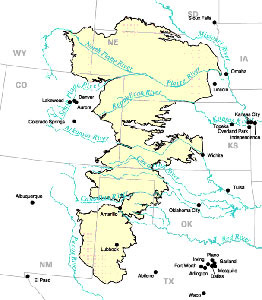 The depletion of the Ogallala Aquifer has made headlines the past several years and has been a concern to many who live on the Southern Great Plains region, including the Texas High Plains, along with portions of Colorado, Kansas, New Mexico and Oklahoma. The aquifer encompasses more than 170,000 square miles, making it a sizeable and vital water resource.

The importance of preserving the aquifer is why, a decade ago, Texas Tech University teamed up with the U.S. Department of Agriculture’s Agricultural Research Service, as well as other universities, including Kansas State, Texas A&M and West Texas A&M, to study the aquifer in more detail, said Sukant Misra, associate dean for research in Texas Tech’s College of Agricultural Sciences and Natural Resources.

For its work and dedication to finding water-saving solutions, the team of researchers involved in the Ogallala Aquifer Program were awarded the “2013 USDA Secretary’s Honor Award” in the category of Enhancing Economic Vitality and Quality of Life in Rural America. The award, considered by many as the most prestigious departmental award given by the USDA secretary, was presented last month in Washington, D.C.

“It’s an honor to receive the award because it recognizes great, collaborative work conducted over a number of years,” Misra said.

The research was aimed at:

The combined work has helped to better understand water management and allow for the development of tools farmers and ranchers can use.

Among the advancements within Texas Tech’s portion of the program were:

The Ogallala Aquifer region produces about 4 percent of the nation’s corn, 25 percent of its hard red winter wheat, 23 percent of its grain sorghum, and 42 percent of its fed beef. Water availability, cost, policy, technology development and adoption rates will shape the rural landscape in the coming decades.

Looking Back: Most Viewed Videos