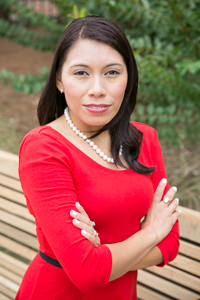 Every Texas Tech University student draws inspiration – no matter how big or small – from somewhere.

Lucinda Holt’s college career is filled with moments that keep her motivated. So much so that the senior journalism major easily could serve as an inspiration for others.

As a 30-year-old non-traditional, first-generation college student, wife and mother of two, Holt knows what it’s like to overcome obstacles. Before she even arrived at Texas Tech, she overcame the deaths of her sister and father.

“Lucinda is a great example of somebody who life has presented some challenges and obstacles but she has persevered and found ways to overcome them,” said David Perlmutter, dean of the College of Media & Communication. “She is making us and her family proud and contributing a lot to our campus and our college. We’re very proud of her.”

Holt said she remembers sitting on her father’s lap at a young age while pretending to read the newspaper in her hometown of Slaton. Those times instilled the importance of news and helped determine her career path.

During high school Holt had the opportunity to live with her sister, Lydia, who was 15 years older. The sisters quickly developed a bond and became best friends.

After graduating high school, Holt became the first in her family to attend college, choosing Western Texas College in Snyder to study radio, television and film.

During her second year of college, she said her sister died in a car accident after being hit by a drunk driver.

“I fell into a pretty deep depression and I didn’t finish my last year,” Holt said. “My family thought it was best if I moved back home and return to school when I was ready. Unfortunately it was harder to cope with than I thought.”

Back in Slaton, she met her husband, Justin, who was joining the Army. They moved to El Paso and beginning a family became a priority. Seven years after her sister’s death, Holt had a child and was pregnant with another. While her husband was deployed in Iraq, she received another massive blow: her father suffered a stroke.

“After the stroke, his health just started deteriorating and he eventually passed away due to complications,” she said.

After a quick stint in Austin, Holt and her family moved back to West Texas – Lubbock to be exact. She said her sister had always dreamed of attending Texas Tech, so Holt quickly set her sights on becoming a Red Raider.

But first, she graduated from Western Texas College to close that chapter in her life.

“It was only after moving back home that Lucinda went back to school,” Justin said. “She faced and overcame several challenges in the past, and was always a strong determined person. Overcoming these challenges shows how Lucinda is truly unstoppable.”

Now, Holt is in her second year at Texas Tech and wants to be a foreign correspondent. She said with her sister’s love of the university and her father’s passion for news, she has chosen the correct career path.

“My sister and father were very big influences in my life,” she said. “I do feel their presence sometimes. I will come across a heart in random things and I think that’s them telling that they’re proud of me, that I’m doing a good job, and encouraging me.”

Her husband also made an impact on her career choice. When he’d return from the Middle East, she said he would bring back trinkets and stories. She said she wants to share the stories of people there.

“I never thought I would come back to school and finish, but I am here and I am grateful,” Holt said. “Everything that happened in the past happened for a reason. Good or bad, you just have to take life as it comes.”

Getting to Know Lucinda Holt

Being the keynote speaker at the College of Media & Communications scholarship luncheon. Speaking there opened up a lot of doors for me, and I had the opportunity to meet with some very wonderful people.

Robert Wernsman. Coming to Texas Tech was my first time in a classroom setting in more than 10 years. Even though he was very intimidating to a number of people, I saw a lot of my father in him.

The chairs by the window in the Student Union Building. I just sit there quietly and watch life just pass by.

I feel like Homecoming is a very important tradition for Texas Tech students.

I love the people and opportunities. I feel like the professors offer parental advise. It’s a very familial campus.

As cheesy as this sounds, my red Red Raider Orientation shirt with Raider Red on it. That was my first piece of Texas Tech clothing, so it signified me starting a new chapter of my life.