The rare female phytosaur skull is believed to be more than 200 million years old. 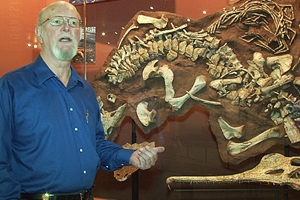 Bill Mueller stands in front of the case that houses the skull, bottom right, of the new phytosaur species.

In the dangerous waters of an ancient oxbow lake created by a flooded and unnamed meandering river, the female phytosaur died and sank to the bottom 205 million years ago. About 40 yards away the remains of a larger male also came to rest, and both disappeared in a tomb of soil and sediment.

Evidence for the cause of their deaths and the rest of their bodies vanished with time, but their skulls remained. After careful research, a Texas Tech paleontologist says he and others have discovered a new species of the Triassic-age monster in the wilds of West Texas.

Their findings were published in the peer-reviewed journal, Earth and Environmental Science Transactions of the Royal Society of Edinburgh.

Bill Mueller, assistant curator of Paleontology at the Museum of Texas Tech University, said the team named their find Machaeroprosopus lottorum after the Lott family who own the ranch on which the animal was discovered.

“We found them in an area we'd been excavating in,” Mueller said. “I think we've gotten four skulls out of that area already. Doug Cunningham found this specimen, and then we dug it up. When he found it, just the very back end of the skull was sticking out of the ground. The rest was buried. We excavated it and brought it into the museum to finish preparation.”

Cunningham, currently a field research assistant at the museum and a retired firefighter, remembered finding the unusual female skull on June 27, 2001. After removing it from the mudstone, he recalls looking it over carefully with others and wondering if his discovery would add a new animal to science.

“It was really well preserved with the teeth and everything,” Cunningham said. “Finding one with teeth is pretty rare. It was so odd, but when they come out of the ground, you have a long way to go to actually see what you have because they’re still covered in matrix. We were all kind of in awe of it. It had this long, skinny snout. It was quite a bit different. It took me years to get it prepped and ready. At the time, I was working full-time and I did that on my days off.”

By looking an opening on the skull called the supratemporal fenestra, the snout and the shape of the bones at the back of the head, the team compared it to other phytosaurs and determined they’d discovered a separate species.

While West Texas is dry and dusty today, Mueller said the landscape looked more like a swampy, tropical rainforest during the Triassic period. Our planet’s landmasses had converged to form the supercontinent of Pangaea. In the forest undergrowth covered by tall conifers and choked with ferns, phytosaurs lurked beneath the water and waited for prey. 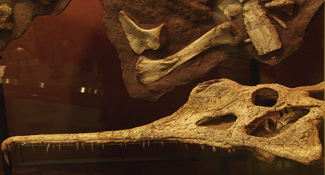 The female skull still had its teeth intact, which made the find even rarer.

“A phytosaur resembles a crocodile,” Mueller said. “They had basically the same lifestyle as the modern crocodile by living in and around the water, eating fish, and whatever animals came to the margins of the rivers and lakes. But one of the big differences is the external nares, the nose, is back up next to its eyes instead of at the end of its snout.”

Mueller said scientists can tell the sexes of the animals by a distinctive feature on males. A bony crest stretched from the nostrils by the eyes to the tip of the animal’s beak – a feature lady phytosaurs probably found sexy.

Mueller said phytosaurs lived throughout the Triassic period from 230 to 203 million years ago, but died out during a mysterious mass extinction. Highly successful animals, they are commonly found because these animals liked to live in swampy areas and were more likely to become covered in sediment and fossilized.