More than 2,300 students will graduate during five ceremonies at the United Spirit Arena. 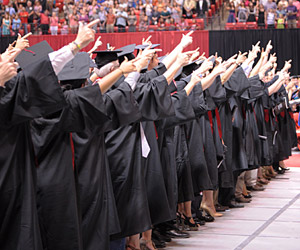 Commencement exercises for the College of Arts and Sciences begin at 3 p.m. Friday. The Graduate School follows at 7 p.m.

On Saturday, the Rawls College of Business, Honors College, College of Media & Communication, College of Agricultural Sciences and Natural Resources, and the College of Visual and Performing Arts will begin their ceremony at 9 a.m. The Colleges of Architecture, Education, Engineering, Human Sciences, the Office of the Provost (B.A. University Studies) and Wind Energy will begin commencement exercises at 1:30 p.m. The School of Law will hold its hooding ceremony at 5 p.m.

All ceremonies will take place at the United Spirit Arena (18th Street and Indiana Avenue), with the exception of the School of Law, whose ceremony takes place in the Lanier Auditorium at the law school (1802 Hartford Ave).

Paul L. Foster, founder and executive chairman of Western Refining, Inc., a Fortune 500 oil refining and marketing company based in El Paso, will speak at Friday’s ceremonies. Texas Tech Alumnus O. Wayne Isom, the Terry Allen Kramer Professor of Cardiothoracic Surgery and the chairman of the Department of Cardiothoracic Surgery at New York Presbyterian-Weill Cornell Medical Center, will speak at Saturday’s undergraduate ceremonies. William B. Dawson, a partner in the Dallas office of Gibson, Dunn & Crutcher and Texas Tech School of Law alumnus, will speak at the School of Law Hooding Ceremony.

Ceremonies can be viewed online at www.commencement.ttu.edu/livestream.

The highest ranking fall graduates for each college include:

Receptions for the colleges will be held immediately following the ceremonies. Receptions will be located as follows:

Jones AT&T stadium will be open for graduates to take photos with family members and friends from 8 a.m. – 4:30 p.m. Friday. Graduates may enter through the top of home tunnel on the southwest side by Gate 1. Graduates and their visitors will be able to park in the C1 lot west of the stadium.