Ceremony recognizes excellence in teaching, research and commercialization throughout the TTU System. 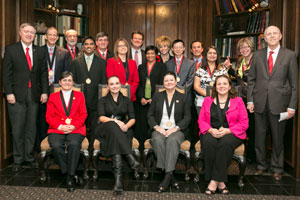 “We are pleased to present these outstanding awards to such esteemed individuals,” Hance said. “These faculty members represent the best of the best and continue to take our universities to new heights.”

“We are grateful to have such hardworking faculty members on our team,” Hance said. “Their efforts not only benefit our students and research efforts but also advance the reputation of our institutions.”

Each winner receives a commemorative medallion and a $5,000 award. The Chancellor’s Council raises funds for student scholarships and recruitment, faculty awards and support, and other programs of excellence.

The Distinguished Research Awards went to the following individuals:

The Distinguished Teaching Awards went to the following individuals:

The Distinguished Commercialization Awards went to the following individuals: