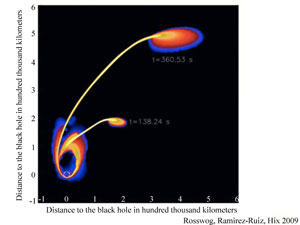 An international team of astronomers, including Texas Tech University’s Tom Maccarone, believes they have observed a rare cosmic accident in which a small star is pulled apart by a medium-sized black hole.

The scientists used NASA’s space telescope Chandra to detect unusual X-ray activity that, after being analyzed, turned out most likely to be somewhat of a distress call from the pulled-apart star.

“This is the first time anybody has seen anything like this,” Maccarone said. “But it’s still an open question: is this something extremely rare or are there more events like this happening all the time. Either way, evidence of intermediate-sized black holes, if this interpretation of the data can be confirmed, is a tremendous discovery.”

The X-ray signals captured on the edge of nearby galaxy Messier 86, initially revealed two small emissions with a pause of 4,000 seconds in between. Another 4,000 seconds later the quantity of X-ray radiation suddenly increased by a factor of 100 and then gradually decreased again. The activity was very similar to the signal predicted for a medium-sized member of the black holes family, which pulls apart a so-called white dwarf (the remnants of a star like Earth’s sun).

The video depicts a white dwarf being stretched out and consumed by a black hole.

The timescale of 4,000 seconds concurs with the time needed for the material from the star being pulled apart to rotate once around the black hole, as long as the black hole is about 10,000 times as heavy as the sun. These medium-sized black holes could have arisen early in the history of the universe from the first generation of supernovae. The space around galaxies should, therefore, be full of these, but up until now there was very limited evidence for the presence of this intermediate-type black hole.

The team of astronomers, led by Peter Jonker (Space Research Organization of the Netherlands), seems to have provided the missing evidence. The research results have been published in the The Astrophysical Journal.

“This is probably the tip of the iceberg because we have found more of this strange type of X-ray flash,” Jonker said. “Aidan Glennie, a doctoral student at Oxford, is working with me on a study of two comparable signals from different galaxies. As the chances of such a black hole capturing a star and pulling it apart is very small, this means that there are probably many medium-sized black holes.”

The astronomers also hope it will be possible to observe the merging process in the near future with the improved LIGO and Virgo facilities, and the e-LISA space facility. Astronomers hope to use these to measure the gravity waves transmitted by two merging medium-sized black holes.