This is the first time the school has been recognized by the League of American Bicyclists. 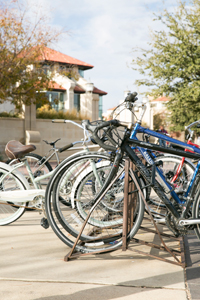 Texas Tech now has racks to park about 8,000 bicycles.

Bicycling is on the rise, especially among young people who are turning away from car ownership in large numbers. More and more people are getting on bikes instead, and colleges like Texas Tech University are leading the way in making riding safer and more convenient on campus.

Today, the League of American Bicyclists announced the latest round of Bicycle Friendly Universities (BFU), and Texas Tech has been named a Bronze BFU. Texas Tech is one of only two universities in the state to be named a BFU.

The application process relies primarily on how a university addresses the five “E’s”: engineering, education, encouragement, enforcement, and evaluation and planning. The five E’s relate to how a university has improved the bicycling experience on its campus. The bronze level Texas Tech earned means the university has taken steps in addressing all five, especially toward one or two E’s.

“We have come a long way in a short time,” Cotton said. “When we first started focusing on the bicycle system about four years ago, we had three miles of on-street bike lanes. That has now blossomed into the three miles of on-street bike lanes and 60 miles of shared use paths with the implementation of our free-range policy, which allows bicyclists to ride on most sidewalks. Four years ago we had parking capacity for about 6,000 bikes. We now have bike rack space for around 8,000 bikes.”

Polcari serves as the Student Government Association’s director of outreach, and having the League of American Bicyclists name Texas Tech a BFU became his top priority. 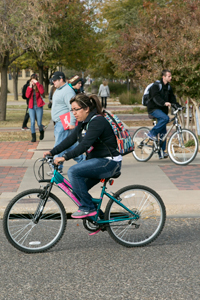 “David really spearheaded this application process,” Cotton said. “It was his motivation to submit the application that really got the ball rolling. It’s because of students just like him that make Texas Tech the great university that it is.”

“We have done in four years what it has taken some of our peers 20 years to accomplish,” Cotton said. “We are nowhere close to done and have many things yet to achieve, but this is a great certification bringing to light all of our hard work.”

“As our Bicycle Friendly University program grows, the promise for a more Bicycle Friendly America does, too,” said Andy Clarke, President of the League of American Bicyclists. “Colleges and universities propel our leaders of the future, and more and more of those students are choosing bicycles as their transportation option of choice. We commend universities, like Texas Tech, who are leading the way to a healthier, more sustainable future.”

There are now 75 BFUs in 32 states and Washington, D.C. The Bronze BFU award recognizes Texas Tech’s commitment to improving conditions for bicycling through investment in bicycling promotion, education programs, infrastructure and pro-bicycling policies.

The program provides a roadmap to building a Bicycle Friendly University, and the application has become a rigorous and educational tool. The four levels of the award—platinum, gold, silver and bronze—provide an incentive for universities to continuously improve.