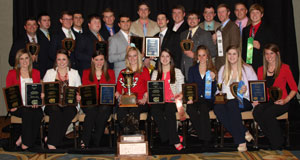 This is the third consecutive year that Texas Tech has won the title, making it only the second university in the history of intercollegiate meat judging to accomplish the feat.

“We are very proud of the efforts of these young men and women and their representation of our university on a national stage,” said M. Duane Nellis, president of Texas Tech. “The meat judging program has a successful and storied history and continues to be the benchmark nationally for other programs. A tremendous amount of praise and gratitude goes to Coaches Mark Miller and Loni Woolley and to the College of Agricultural Sciences and Natural Resources for its dedication and commitment to our students.” 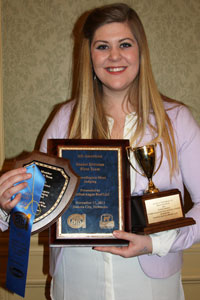 In the alternate division, Texas Tech boasted nine of the top-ten individuals overall including high individual Mallory Jones, a junior from Anson.
Other team members included:

The prestigious Rachel Hamilton Spirit Award, an award given in recognition of the commitment, dedication and teamwork displayed during a team member’s meat judging career was given to Childers.

“This is a very special group of students who have worked hard this year,” said Mark Miller, professor and San Antonio Livestock Show & Rodeo Distinguished Chair in Meat Science. “They courageously came back from a loss at the Eastern National and the American Royal contests and committed themselves to working hard as a team to win decisively at the International.”

The team was coached by Woolley, who is a graduate student, along with Miller.