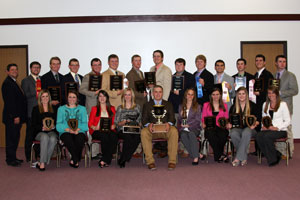 “The team was extremely consistent in specifications and beef grading,” said Mark Miller, the meat judging team coach and Texas Tech’s San Antonio Stock Show and Rodeo Distinguished Chair in Meat Science. “We must maintain our focus and intensity as we prepare for the national competition.”

Separately, the team had seven of the top-ten individuals in the alternate division including Krause who was high individual.