Ifeatu Okafor was recently named the NCAA Woman of the Year. 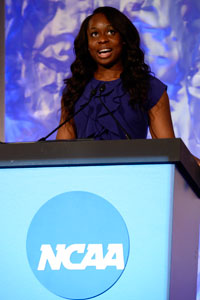 Okafor was recently named the NCAA Woman of the Year.

Okafor said when she encountered something that was not helping her excel, she’d push it to the side so she could continue moving forward. Her progress reached a pinnacle when she was recently named the NCAA Woman of the Year at a ceremony in Indianapolis. Okafor is the first woman from the Big 12 Conference to win the honor.

“It is extremely humbling,” said Okafor, an All-American shotput thrower. “They had amazing girls to choose from. I am very grateful to all of the people who helped me get to where I am today.”

Okafor was selected from nine finalists representing NCAA Division I, II and III for her achievements in athletics, academics, leadership and community service. More than 450 student-athletes originally were nominated for the award.

At Texas Tech she learned time management and how to persevere through obstacles, all of which built her character. Okafor graduated with honors in Exercise and Sports Sciences in May 2012 and then continued her education and earned a second bachelor’s degree in Human Sciences in May 2013. She currently is attending physician assistant school at UT-Southwestern Medical Center in Dallas. 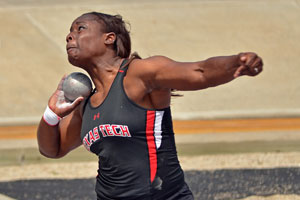 Okafor was selected for her achievements in athletics, academics, leadership and community service.

While competing, she earned the Dr. Gerald Lage Award presented by the Big 12 Conference in 2012, which is the highest academic recognition given by the conference. She also was a finalist for the Arthur Ashe Jr. Sports Scholar award in 2013, a four-time Academic All-Big 12 selection and received all-academic honors from the U.S. Track and Field and Cross-Country Coaches Association.

Her collegiate success was aided by her professors and the Marsha Sharp Center for Student-Athletes, which provides necessary resources for student-athletes to achieve their academic potential and prepare them for life after college.

Okafor said her professors were willing to help and understanding when she had to miss classes to travel to athletic events. Texas Tech faculty, staff and administration went above and beyond to make sure she was doing well, she said.

“Texas Tech helped make me who I am today and I will never forget that,” Okafor said. “The struggles I experienced, situations I overcame at Texas Tech helped develop my character. I can now apply these characteristics to my everyday life.”

Getting to Know
Ifeatu Okafor

There are so many good memories: winning conference in 2011; beating Texas in football in 2008 and rushing the field, which was my first college football game.

Texas Tech has a history of great throwers, including Jason Young who is a professional discus thrower. He was the strength coach and assistant with training. My older sister Nkeonye also attended Texas Tech.

The Marsha Sharp Center for Student-Athletes was where I spent most of my time and where I made several friends, as well as bonded with the academic faculty, staff and administrators.

Tailgating and camping out before home games and Raiderwalk.

Everything that we stand for and represent. Honor, commitment and fearlessness!

Take advantage of every opportunity placed before you. Be committed, consistent, and give your all in all that you do. Never give up, never lose faith, always be hopeful, and endure in every circumstance.