Academics and athletics team up for Red Raider and Lady Raider basketball promotions. 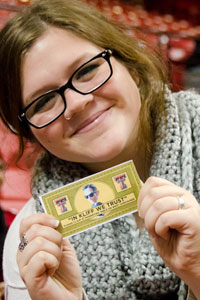 Money dropped from the rafters was redeemable at concession stands.

During the recent Lady Raider basketball game against Arizona State, money rained from the rafters of the United Spirit Arena, falling into the hands of lucky Texas Tech fans.

Of course, the cash wasn’t negotiable, except at the arena concession stands, and looked a lot like Monopoly money that featured Raider Red and head football coach Kliff Kingsbury.

A day later students were treated to a “Fearless Fan” promotion complete with throwback tank tops and a slam dunk contest.

“Each group was given a $1,000 budget with the goal of increasing student attendance and awareness at these two games,” Frias said. “Specifically, students were to create a promotion plan with a halftime promotion, pre-game promotion, a social media plan (Instagram post, Facebook image, and 2-3 tweets) along with a Daily Toreador ad, radio ad and billboard to showcase their idea. Additionally, they were to utilize a portion of their budget for giveaways and/or prizes to enhance student excitement about the event.” 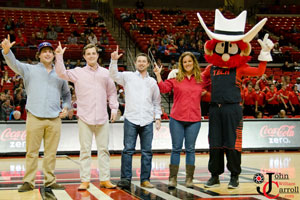 Each group of approximately three students presented their ideas the week prior, and one team from each class was chosen for the games. Elvis Moya and Dinah Goodson with the Texas Tech Athletics Department then worked with the students to execute their ideas for last weekend’s games using the $1,000 budgets.

“We were extremely pleased with the promotions project plans that the students presented through their marketing strategy classes,” said Moya, director of promotions and fan engagement. “Their ideas provided us with great information to help create gameday awareness and excitement for both students and fans alike.”

One group developed the “Fearless Fan” giveaway, “Fearless Fan” costume contest, a vintage throwback tank top and slam dunk contest that was showcased Monday night, a game that was televised on ESPN. 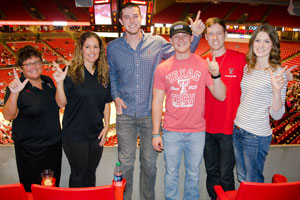 “This project provided students with the opportunity to implement the topics learned in our marketing strategy class,” Frias said. “Further, the winning teams got to sit in the athletic director’s suite to watch the execution of their plans. Overall, this has been a great collaboration and learning experience for our students.”