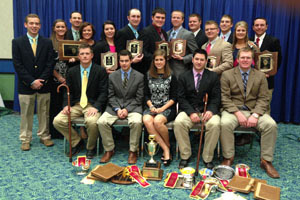 The Texas Tech University Livestock Judging Team was edged out by 18 points at the North American International Livestock Exposition in Louisville, Ky., on Tuesday (Nov. 19) and finished its season as Reserve National Champions.

Since 1900, teams have gathered from across the nation to compete for the title. This year there were 31 universities represented. The competition tested the contestants’ knowledge of cattle, sheep and swine as well as their oral reasons.

“I am really proud of all of the students on the team,” said Coach Ryan Rathmann, the John W. and Doris Jones Endowed Professor in Texas Tech’s Department of Animal and Food Sciences. “They set their goals high this year and pursued their objective with a relentless work ethic that is rare. They are high quality people, and I know this experience will go a long way in shaping their futures.”

The team was coached by Rathmann along with graduate student Brady Ragland.

Two Texas Tech team members were selected to the All-American Team, as well. Crownover and Jackson both received this prestigious honor based upon their scholastic achievements, community service and contest performance.

“Livestock judging has been an incredibly rewarding experience for us all,” Jackson said at the conclusion of the contest. “We have gained friendships and expanded our livestock knowledge. We will cherish these memories and are all very proud of each other’s accomplishments.”