Former Astronaut and Vietnam Veteran to Speak at Texas Tech

This is the final event in this year’s series of distinguished speakers hosted by The Vietnam Center and Archive.

WHAT:           The Vietnam Center and Archive Guest Lecture Series with Col. Mike Mullane

EVENT:          A 1967 graduate of West Point, Mullane was commissioned in the USAF and served as a weapon systems operator aboard an RF-4C Phantom, completing 150 combat missions in Vietnam. 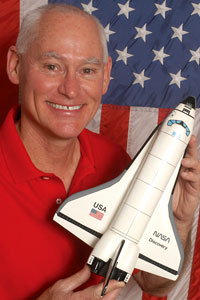 Mullane was selected as a mission specialist for the first group of Space Shuttle astronauts in 1978. He completed three space missions and logged 356 hours in space before retiring in 1990.

Mullane has been inducted into the International Space Hall of Fame and is the recipient of many awards, including the Air Force Distinguished Flying Cross, Legion of Merit and the NASA Space Flight Medal.

This is the final event in this year’s series of distinguished speakers hosted by The Vietnam Center and Archive, which is made possible by a grant from the Helen Jones Foundation. It is part of an effort to enrich the study of the Vietnam War’s lasting influence on American politics, society and culture and on contemporary issues in Southeast Asia.