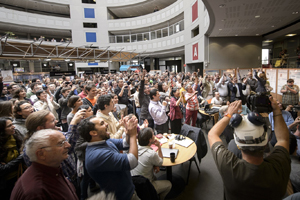 Scientists at CERN react to the announcement of Nobel Prize in Physics.

The Royal Swedish Academy of Sciences today jointly awarded the Nobel Prize in Physics to François Englert and Peter W. Higgs to recognize their work developing the theory of what is now known as the Higgs field, which gives elementary particles mass.

U.S. scientists, including Texas Tech’s High Energy Physics Group, played a significant role in advancing the theory and in discovering the particle at The European Organization for Nuclear Research (CERN) that proves the existence of the Higgs field, the Higgs boson, announced in March this year.

Nural Akchurin, a professor of physics and a member of the physics group has served in leading roles in one of the two major experiments at CERN that is called the Compact Muon Solenoid (CMS). He and three other Texas Tech professors designed calorimeters, which are detectors that measure the energies of fundamental particles and serve as “catcher’s mitts” to grab evidence of the Higgs boson.

“Today, I sincerely congratulate Professors Peter Higgs and François Englert on the award of the 2013 Nobel prize in physics for their pioneering work in identifying the electroweak-symmetry-breaking mechanism,” Akchurin said. “They both deserve it well. Many years and many careers were/are devoted to the investigation of the Higgs particle. I worked on one of the experiments that discovered the Higgs boson, which is the particle responsible for giving mass to an object. To me, personally, this award means that as a society we still care about science and value its place in our lives.”

First imagined in the early ’60s and since dubbed the “God” particle, physicists believe the Higgs boson is responsible for giving mass to particles – basically nature’s smallest building blocks. They make a pencil a pencil or a rock a rock instead of loose energy floating around in space. In July 2012, researchers with the High Energy Physics Group said they and other scientists discovered forensic evidence – a shadow or an impression – of the elusive Higgs boson.

To find Higgs and answer other physics questions, scientists accelerated opposing beams of protons to near the speed of light in the 17-mile, circular Large Hadron Collider (LHC), which lies underground near Geneva, Switzerland, and is considered one of the great engineering milestones of mankind. As these protons were shot around the circular tunnel, the CMS caught what was created when these protons crashed into each other.

Somewhere in the melee of these particles’ high-energy collisions, researchers discovered evidence of the Higgs boson that can be identified by the products of its decay.

Higgs was the last particle of this theory left to be discovered, and its discovery has cemented the Standard Model.

In a decade and a half, Akchurin, three other professors and more than 10 post-doctoral and doctoral students from Texas Tech have joined a phalanx of about 3,000 international scientists probing the bounds of mass and matter and answer some of the universe’s most mind-blowing riddles. 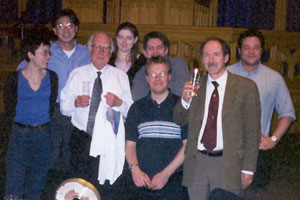 “Some of us invested large portions of our scientific careers into this exploration,” Akchurin said. “I must admit the July 4 announcement last year was special for me in more ways than one. Discoveries tend to be like a flash of light: They are exciting, but last a fleeting moment. In this case, I think the excitement is still with us. There is more work to do, more questions to answer. The more we learn, the more questions appear.”

Since 2009, the international group of scientists has hoped the $8 billion LHC and CMS would prove the existence of matter’s smallest building blocks as well as dark matter, the secrets of extra dimensions and how the universe began.

Sung-Won Lee, an associate professor of physics at Texas Tech, was one of the scientists who watched the calorimeters and hoped to catch Higgs and other new particles. As data accumulated and different analyses were put together by different groups of scientists, he said a clearer picture of Higgs began to emerge.

“The work done by LHC experiments would not be possible without the help of many physicists including Texas Tech researchers,” Lee said. “Personally, I am extremely proud and honored to be part of this great discovery that helped us to answer some of the most profound questions in our understanding of the structure of matter and the evolution of the early universe. I believe that, with Texas Tech’s extensive research experience, we can contribute to making more discoveries in the future.”

Lee said that Texas Tech played an important role in each step of the data analysis that led to the discovery of the Higgs boson at LHC. He and other researchers made a significant contributions to the detector development/commissioning, software development, and high performance computing for analyzing the results. But the work isn’t done yet, Lee said. There may be more than one Higgs hiding among the collision wreckage. The theory of supersymmetry suggests there could be up to five different mass-giving particles.

Nearly 2,000 physicists from U.S. institutions—including 89 U.S. universities and seven U.S. Department of Energy laboratories—participate in the ATLAS and CMS experiments, making up about 23 percent of the ATLAS collaboration and 33 percent of CMS at the time of the Higgs discovery.