Discovery could lead to supplements that will boost metabolism and decrease muscle fatigue. 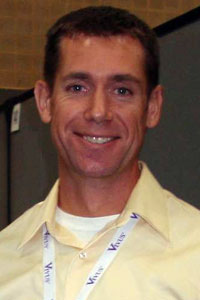 A diet high in a certain type of fat may actually increase metabolism, according to recent research by Texas Tech University nutrition scientists.

After studying genetically modified mice, the discovery could lead to supplements and a diet regimen that will increase metabolism and decrease muscle fatigue in humans.

The research was published in the peer reviewed journal, The Journal of Lipid Research.

Chad Paton, an assistant professor of nutritional biochemistry in the Department of Nutrition, Hospitality and Retailing, said he and colleagues were curious why skeletal muscles of obese people contained a certain type of enzyme that breaks down saturated fats.

To test what that enzyme did, Paton’s lab and colleagues from the University of Wisconsin – Madison genetically modified mice so that their muscles would constantly produce the enzyme.

“We used a transgenic mouse model, and we took the gene that makes the enzyme that’s not normally expressed and took away it’s regulation to make it active all the time,” Paton said. “What we found in those animals is they had a hypermetabolic rate compared to the wild mice, increased energy consumption and greatly increased these animals’ exercise capacity.”

The enzyme, called SCD1, converts saturated fat into monounsaturated fat, which is easier to metabolize. The liver will produce this enzyme depending on the fat content of the food consumed, he said. Fatty adipose tissue produces it all the time as a way of regulating itself.

Only in heavily exercised muscle tissue or in the case of obesity does skeletal muscle produce the enzyme, he said.

After looking at skeletal muscles of the genetically modified mice compared to that of the wild mice, Paton and his team discovered higher levels of polyunsaturated fats, particularly linoleic acid, gotten only through diet. 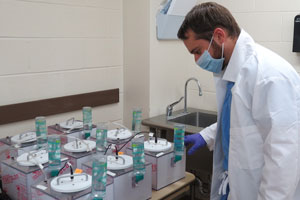 On top of that, their ability to exercise increased.

“We found in the genetically modified animals that they had a hypermetabolic rate,” he said. “They were increasing their energy consumption, and they experienced greatly increased exercise capacity. For example, on the exercise wheels, normal mice fatigue after 7 to 10 minutes. These genetically modified animals wouldn’t fatigue for about 70 minutes. So they were running a lot longer. Sedentary mice looked more like exercise-trained mice. That really made us look in a lot more detail what was happening in the skeletal muscle.”

By looking at the muscle tissues, Paton and his team members discovered a trend.

Humans store unused energy as fat, Paton said. And while that helped our ancestors survive, it can lead to obesity for some people in today’s world of plentiful food.

“That’s where we have taken our research from this,” he said. “You can’t change the human genome, but that gives us insight if you could activate the same part of the DNA in human in skeletal muscles that burn off excess energy as heat instead of storing it. Perhaps it’s a supplement people could take that will turn on the cells’ metabolic machinery, burn off energy and increase mitochondria.”