Sankar Chatterjee presents what he calls the 'Holy Grail of science' to Geological Society of America. 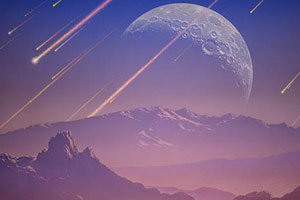 Sankar Chatterjee, Horn Professor of Geosciences and curator of paleontology at the Museum of Texas Tech University believes he has found the answer by connecting theories on chemical evolution with evidence related to our planet’s early geology.

“This is bigger than finding any dinosaur,” Chatterjee said. “This is what we’ve all searched for – the Holy Grail of science.”

Thanks to regular and heavy comet and meteorite bombardment of Earth’s surface during its formative years 4 billion years ago, the large craters left behind not only contained water and the basic chemical building blocks for life, but also became the perfect crucible to concentrate and cook these chemicals to create the first simple organisms.

He will present his findings Oct. 30 during the 125th Anniversary Annual Meeting of the Geological Society of America in Denver.

As well as discovering how ancient animals flew, Chatterjee discovered the Shiva Meteorite Crater, which was created by a 25-mile-wide meteorite that struck off the coast of India. This research concluded this giant meteorite wreaked havoc simultaneously with the Chicxulub meteorite strike near Mexico, finishing the dinosaurs 65 million years ago.

Ironically, Chatterjee’s latest research suggests meteorites can be givers of life as well as takers. He said that meteor and comet strikes likely brought the ingredients and created the right conditions for life on our planet. By studying three sites containing the world’s oldest fossils, he believes he knows how the first single-celled organisms formed in hydrothermal crater basins.

“When the Earth formed some 4.5 billion years ago, it was a sterile planet inhospitable to living organisms,” Chatterjee said. “It was a seething cauldron of erupting volcanoes, raining meteors and hot, noxious gasses. One billion years later, it was a placid, watery planet teeming with microbial life – the ancestors to all living things.” 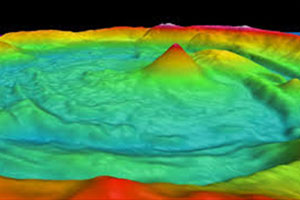 “For may years, the debate on the origins of life centered on the chemical evolution of living cells from organic molecules by natural processes. Chatterjee said life began in four steps of increasing complexity – cosmic, geological, chemical and biological.

In the cosmic stage, a still-forming Earth and our solar system took a daily pounding from rocky asteroids and icy comets between 4.1 to 3.8 billion years ago. Plate tectonics, wind and water have hidden evidence of this early onslaught on our planet, but ancient craters on the surfaces of Mars, Venus, Mercury and our moon show just how heavy the meteorite showers once were.

Larger meteorites that created impact basins of about 350 miles in diameter inadvertently became the perfect crucibles, he said. These meteorites also punched through the Earth’s crust, creating volcanically driven geothermal vents. Also, they brought the basic building blocks of life that could be concentrated and polymerized in the crater basins.

After studying the environments of the oldest fossil-containing rocks on Earth in Greenland, Australia and South Africa, Chatterjee said these could be remnants of ancient craters and may be the very spots where life began in deep, dark and hot environments.

Because of Earth’s perfect proximity to the sun, the comets that crashed here melted into water and filled these basins with water and more ingredients. This gave rise to the geological stage. As these basins filled, geothermal venting heated the water and created convection, causing the water to move constantly and create a thick primordial soup.

“The geological stage provides special dark, hot, and isolated environments of the crater basins with the hydrothermal vent systems that served as incubators for life,” he said. “Segregation and concentration of organic molecules by convective currents took place here, something like the kinds we find on the ocean floor, but still very different. It was a bizarre and isolated world that would seem like a vision of hell with the foul smells of hydrogen sulfide, methane, nitric oxide and steam that provided life-sustaining energy.”

Then began the chemical stage, Chatterjee said. The heat churning the water inside the craters mixed chemicals together and caused simple compounds to grow into larger, more complex ones. 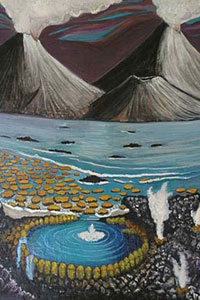 Eventually, the first life forms left the confines of the crater and ventured into the newly formed oceans.

Most likely, pores and crevices on the crater basins acted as scaffolds for concentrations of simple RNA and protein molecules, he said. Unlike a popular theory that believes RNA came first and proteins followed, Chatterjee believes RNA and proteins emerged simultaneously and were encapsulated and protected from the environment.

“The dual origin of the ‘RNA/protein’ world is more plausible in the vent environments than the popular ‘RNA world,’” he said. “RNA molecules are very unstable. In vent environments, they would decompose quickly. Some catalysts, such as simple proteins, were necessary for primitive RNA to replicate and metabolize. On the other hand, amino acids, from which proteins are made, are easier to make than RNA components.”

The question remains how loose RNA and protein material floating in this soup protected itself in a membrane. Chatterjee believes University of California professor David Deamer’s hypothesis that membranous material existed in the primordial soup. Deamer isolated fatty acid vesicles from the Murchison meteorite that fell in 1969 in Australia. The cosmic fatty bubbles extracted from the meteorite mimic cell membranes.

“Meteorites brought this fatty lipid material to early Earth,” Chatterjee said. “This fatty lipid material floated on top of the water surface of crater basins but moved to the bottom by convection currents. At some point in this process during the course of millions of years, this fatty membrane could have encapsulated simple RNA and proteins together like a soap bubble. The RNA and protein molecules begin interacting and communicating. Eventually RNA gave way to DNA – a much more stable compound – and with the development of the genetic code, the first cells divided.”

The final stage – the biological stage – represents the origin of replicating cells as they began to store, process and transmit genetic information to their daughter cells, Chatterjee said. Infinite combinations took place, and countless numbers must have failed to function before the secret of replication was broken and the proper selection occurred.

“These self-sustaining first cells were capable of Darwinian evolution,” he said. “The emergence of the first cells on the early Earth was the culmination of a long history of prior chemical, geological and cosmic processes.”

Chatterjee also believes that modern RNA-viruses and protein-rich prions that cause deadly diseases probably represent the evolutionary legacy of primitive RNA and protein molecules. They may be the oldest cellular particles that predated the first cellular life. Once cellular life evolved, RNA-viruses and prions became redundant, but survived as parasites on the living cells.

The problem with theories on the origins of life is that they don’t propose any experiments that lead to the emergence of cells, Chatterjee said. However, he suggested an experiment to recreate the ancient prebiotic world and support or refute his theory.

“If future experiments with membrane-bound RNA viruses and prions result in the creation of a synthetic protocell, it may reflect the plausible pathways for the emergence of life on early Earth,” he said.