Nicole Garza is now a news anchor for a local television station. 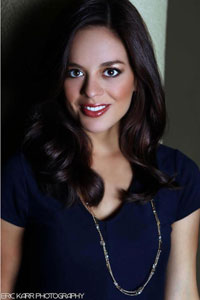 Nicole Garza, who graduated from Texas Tech in 2010 with degrees in Spanish and broadcast journalism, can be seen anchoring Fox 34’s Good Day Lubbock every morning. Garza’s Hispanic background shaped her undergraduate experience as well as her post-graduate success.

“I surrounded myself with people who were just like me in the beginning—which was great—but what I didn’t realize was that diversity has a different definition for every person,” Garza said. “If you really think about what diversity means, I wasn’t experiencing it to its full potential until I really got out there.”

Garza is one of many members of the Texas Tech community, including students, faculty, staff and alumni, who embrace their own culture and celebrate diversity in their personal and professional lives. Texas Tech’s Division of Institutional Diversity, Equity and Community Engagement will host the annual Celebrate Diversity Awards Banquet Wednesday (Oct. 16) at the Mckenzie-Merket Alumni Center. The banquet features guest speaker Soledad O’Brien, who, like Garza, has found her calling in broadcast journalism.

Originally from Zapata, Texas, just across the border from Mexico, Garza grew up surrounded by family and friends who shared her Mexican heritage. She decided to attend to Texas Tech because of its broadcast journalism program and scholarship opportunities.

She didn’t know then that Texas Tech would change her outlook on herself, diversity and the world beyond college.

Through Mentor Tech and the Hispanic Student Society, Garza was active in student organizations that surrounded her with students who shared her Hispanic background. She says these organizations gave her opportunities to find positions of leadership and get involved in the Lubbock community. 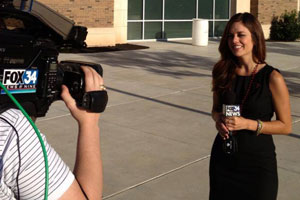 Garza chose Texas Tech because of its broadcast journalism program and scholarship opportunities.

“I met students who were a lot like me, from all over the state and the nation—even some other nations,” Garza said. “We talked about school stuff; we had fundraisers at Texas Tech. We also had salsa nights and got together at people’s houses. It was a great opportunity to have a social aspect tied into an educational organization.”

During her sophomore year, Garza joined the Greek organization Alpha Chi Omega. There, she found a common bond with girls from all different backgrounds.

“Being in the sorority put me in touch with girls from all different cultures and socio-economic backgrounds,” Garza said. “No matter what their background or ethnicity was, I could relate to them.”

She also was involved with President’s Select and studied abroad at Texas Tech’s campus in Seville, Spain. She says these experiences allowed her to immerse herself in her Hispanic heritage in unique ways.

Through President’s Select, Garza returned to her hometown and recruited high school students to Texas Tech by sharing her own experiences with potential freshmen. Her time in Seville made her appreciative of her heritage, and she ended up receiving a major in Spanish.

“I decided I’m going to be able to go home and talk to my grandmother, who knows not one word of English, the way she deserves to be talked to,” said Garza, who struggled with speaking proper Spanish before she came to Texas Tech. 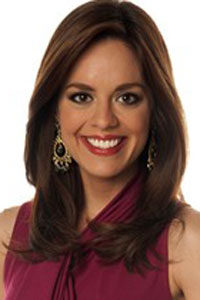 Garza is an anchor/reporter at Fox34 Lubbock.

During her senior year, Garza took on an internship with FOX 34. She worked hard enough to be offered a job upon graduation, where she was able to use her Spanish skills on occasion. Although the first time she had to report live in Spanish was daunting, she says those kinds of opportunities have allowed her to combine both her academic interests.

Even though Garza came to Texas Tech and saw herself as different because she was a minority, she realized that the diversity all over campus helped her grow and learn more about herself and the world.

“I came to realize that Texas Tech was actually the most diverse place I’d ever been,” Garza said. “I grew up in a town where everyone had a Hispanic mom or dad, and everyone had grandparents that lived in Mexico. But I didn’t know people that came from different backgrounds.”

Garza explained her experience at Texas Tech gave her an appreciation for her heritage and an understanding of how to make the most of her opportunities.

“I have gone through times of struggle like anyone would when adapting to new environments,” Garza said. “I’ve had to prove my worth as a person in general and in my abilities past being Hispanic. Nowadays it doesn’t matter if you are the best, most-diverse person for the job. Everyone is diverse or different in some way. You simply have to be your best.”