Faculty and staff gave the university a ranking that indicates they are 'very satisfied.' 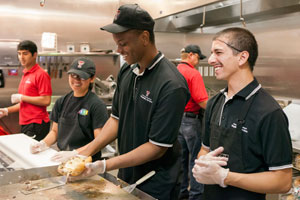 According to a Glassdoor report, Texas Tech is the number one university to work for in the nation.

According to a Glassdoor report released today (Sept. 20), Texas Tech University is the number one university to work for in the nation.

“There has never been a more exciting time at Texas Tech, and our ranking as the number one university to work for in the nation proves that this is the place to be,” Hance said. “Texas Tech is known for its friendly environment, and that’s because we have the best faculty and staff in the country.”

According to the Glassdoor blog, six Texas-based universities are in the top 25 ranking, which was compiled by user ratings and reviews of university employers. Texas Tech is named number one, with Carnegie Mellon University, Brigham Young University, the University of Texas at Austin and Iowa State University rounding out the top five.

The site reviews employers both by an objective numerical system and by user-provided reviews. Texas Tech faculty and staff gave the university an average ranking of 4.4 out of 5, indicating that in general, employees are “very satisfied.”

An example review from a Texas Tech instructor featured on the site reads: “The people there are very laid back. The campus is beautiful. The pay is competitive with other universities. You are free to do your own thing, just be ready at the deadline.”

“Our faculty and staff are among the brightest and most hard-working individuals in the country,” said Texas Tech President M. Duane Nellis. “We are humbled and appreciative of their positive feedback, and I am confident that such an optimistic outlook on Texas Tech reflects our commitment to every member of the Red Raider family.”

Information about Texas Tech employment can be found at jobs.texastech.edu.