Texas Tech scientists say their findings are one small piece in a very large puzzle. 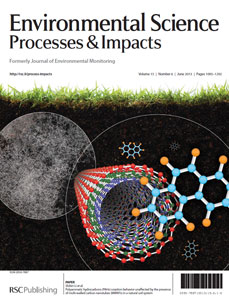 When it comes to carbon nanotubes (CNTs) in the soil, recent research at Texas Tech University shows that the new materials do not affect the sorption of the toxic part of oil called polycyclic aromatic hydrocarbon (PAHs).

Scientists at The Institute of Environmental and Human Health say that’s one very small piece in a very large puzzle in trying to understand the possible environmental impact of CNTs – a new material with myriad uses, yet unregulated at the nano-scale by the regulatory agencies. The research was the featured cover article in a recent edition of the peer-reviewed journal, Environmental Science: Processes & Impacts (previously known as Journal of Environmental Monitoring).

The results surprised Shibin Li, lead researcher on the study and a former doctoral student at The Institute of Environmental and Human Health who used his findings for his dissertation.

A carbon nanotube is made of graphene – the world’s strongest known substance. Graphene is a super-thin sheet of carbon atoms arranged in a hexagonal “honeycomb” pattern. Conventional pencil graphite is simply many layers of graphene stacked together.

When rolled into a tube, graphene forms a CNT, a fiber 100 times stronger than steel and six times lighter. This new material could pave the way for remarkable technology, from improved computer chips, flexible computer screens or body armor, to health applications such as bone healing and cancer treatments and agricultural products, such as smart-delivery pesticide and fertilizer applications. 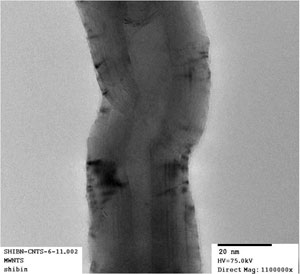 But with the growing uses for the new material, concerns also grow that these novel nanomaterials may have negative or unintended effects on organisms and the environment, Li said.

“As one of the most largely produced nanomaterials, nanotubes could be released into the environment through various scenarios, such as release from textiles, during incineration and landfills,” he said. “History tells us that fully understanding a newly synthesized material will guarantee its long-term and safe use in the society. Hence, investigations of carbon nanotube fate and toxicity are needed. Similar to conventional contaminants, the fate of nanomaterials in the environment could change their bioavailability, and has a large impact on their ultimate toxicity.

To study the effect, Li worked with Jaclyn Cañas-Carrell, an associate professor in the Department of Environmental Toxicology, who with Micah Green, an assistant professor of chemical engineering at Texas Tech, recently developed a method for detecting CNTs in the soil using microwaves.

In the experiment, Cañas-Carrell said researchers put nanotubes and PAHs in the soil and looked at basic sorption tests. They used PAHs because much is known about how these chemicals bind to soil.

“You can tell about how bioavailable a certain chemical will be by how sorbed it is to the soil,” she said. “The higher the sorption, the less bioavailable it is to animals that live in the soil, or eat the soil. You want it to stick to the soil to reduce toxicity. We found no effect of carbon nanotubes in the presence of PAHs, which was strange, since PAHs are good at sorbing to organic compounds. We thought maybe we’d see an increase in sorption. That wasn’t the case. It was a neutral effect.”

Both Cañas-Carrell and Li say this finding is a very small piece of a very big puzzle, and it’s hard to draw major conclusions from the finding yet. However more studies should be done to understand the effect this new technology may have on the environment.

“This is a lesson learned from history,” Li said. “People didn’t worry about the adverse effects to the environment and human beings with lots of the traditional contaminants, such as PAHs, PCBs and asbestos. Regulations needed to catch up after people realized the soil, water, air and themselves get adversely affected by these materials. For materials in a nano-scale, their toxicity, generally related to their physicochemical properties, might get enlarged simultaneously. It is the toxicologist’s responsibility to address this issue to the public. It is worthwhile to note that, it does not necessarily mean that they are toxic because they are studied. Again, what we are doing now is to have a better understanding of their toxicity, either toxic, or non-toxic.”