Chris Trobridge's interest in military and aviation led him to join the Commemorative Air Force. 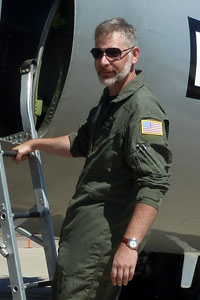 He grew up surrounded by military and historic aviation his entire life, so it was only fitting that he found an interest in aviation himself.

Interest in aerospace runs deep in Chris Trobridge’s family. His grandfather was a World War II flight engineer on the B-24 Liberator bomber of the Pacific Theater. Trobridge’s father followed in his own father’s footsteps and worked in the aviation industry.

So when the Texas Tech University doctoral candidate had the opportunity to join Midland’s American Airpower Heritage Museum (AAHM) in 1998, Trobridge knew it was something he wanted to do. The museum is affiliated with the Commemorative Air Force (CAF) to serve as its educational partner. The CAF travels across the country with rare aircraft.

“The Commemorative Air Force is an organization founded in 1957 to collect, preserve and operate the Allied aircraft of World War II to honor the men and women who built, serviced and flew these aircrafts,” Trobridge said. “Today it has grown from a handful of men in the Rio Grande Valley to an international organization of more than 10,000 people and 150 aircraft.”

Trobridge moved from Rhode Island to Midland, where he worked at the traditional museum for four years. He became active in the CAF’s B-29 and B-24 Squadron and High Sky Wing. The CAF is structured into about 50 units around the world, many of which operate rare aircraft.

He moved to Lubbock in 2002 and in 2008, began pursuing his doctorate in history. The same year Trobridge was named the public information officer of the CAF, where he was editor of the unit newsletter and primary media contact as the squadron toured the B-29 Superfortress and B-24 Liberator around the country. 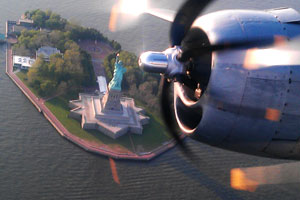 Trobridge circled the Statue of Liberty in the world's only flying B-29 Superfortress.

As public information officer, Trobridge often toured with the aircraft and had opportunities to fly down the Hudson River and circle the Statue of Liberty in the world’s only flying B-29.

Trobridge resigned from the position six months ago to complete his dissertation in the Department of History, but continues to volunteer with the organization. His dissertation focuses on examining the cultural, technological and financial aspects of the introduction of commercial jet aircraft.

He also served as a flight engineer while aboard the B-24 and scanner on the B-29 Superfortress. Although he is not a pilot, the scanners and flight engineers are part of the flight crew to insure safe operation of the bombers.

“In addition to helping with the maintenance and operation of the aircraft, we tour the nation, making about 30 to 40 stops a year, during which we allow visitors to come to the aircraft, take a tour and learn the history of it,” he said.

The tours allow those working and volunteering with the CAF to travel around the country with the aircrafts. The squadron is composed of about 300 members many of whom volunteer for weeks at a time to travel. 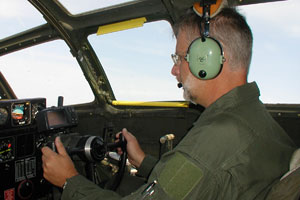 Trobridge said during tours, the volunteers become educators and also meet the men and women who served in World War II.

“The most rewarding experiences are when World War II veterans and their families come and visit the aircraft,” he said. “We will have the veteran sit in his position and tell the family about their experiences. For some of the veterans it is the first time to have talked about what they did during the war.”

The purpose of flying the aircraft is to honor the men and women who built, serviced and flew the aircraft. Those involved with the CAF also fly over funerals of veterans whenever possible to pay them last respects.

“I have met a number of very special men during my time with the Commemorative Air Force,” Trobridge said. “Many of the men who flew these aircraft came home and put away their uniforms and continued on with their lives, so it is our responsibility to honor them and their service.”