Texas Tech students get an inside look at how the government functions. 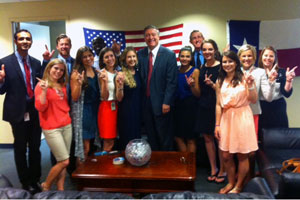 Texas Tech University named 11 students to serve as congressional interns during the summer.

Students participating in the program observe government functions from an inside point-of-view and play an important role in the offices of various senators and representatives. The Office of the President at Texas Tech coordinates the internship program and provides scholarships for the students.

“We are very proud of our summer interns and the opportunities this program gives to our students. These students not only represent Texas Tech on the national level, but also gain perspective on how our government works and the hours invested behind the scenes to get the job accomplished,” said University Counsel Ronald Phillips. “These students and the many that have walked the halls before them continue to exemplify excellence in Washington, D.C. and make us eager to continue providing resources for this program.”

Texas Tech interns are selected through an extensive interview process and have the opportunity to intern at either the federal or state level.