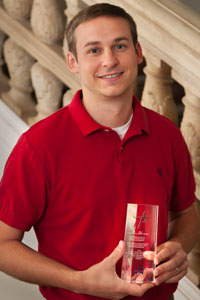 Matt Simmons attended the conference and accepted the award on behalf of the office.

The National ADDY® Awards were held in conjunction with the 2013 American Advertising Federation (AAF) National Conference Saturday (June 8). The Texas Tech University Office of Communications and Marketing was awarded a Silver ADDY at the ceremony in Phoenix.

“This award is a testament to the successful cohesive and collaborative environment among our staff,” Cook said. “Our designers and writers have collaborated to produce material that enhances our brand and positively reflects the initiatives of the university and its colleges and departments. I am proud of the work they do and we are fortunate to have them on our staff.”

Simmons attended the awards ceremony for his work on the report.

“I was thrilled and quite surprised to find out that we had won a National ADDY award,” Simmons said. “Just to be considered next to ads like Allstate's Mayhem, Nike, Old Spice, Oreo and all the best in advertising, was quite an honor and a very humbling experience. I have been very inspired from the level of competition to push the boundaries of graphic design and advertising.”

With more than 50,000 total entries each year, the ADDY Awards are the industry’s largest and most representative competition, recognizing and rewarding creative excellence in the art of advertising. They are unique for the three-tier system, starting with local chapters.

The Lubbock ADDY Awards were held Feb. 23. Local winners went on to compete in the district competition against other entrants from Texas, Oklahoma, Arkansas and western Louisiana. District winners were then forwarded to the National ADDY Awards competition.