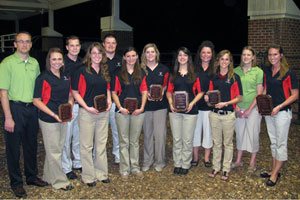 The Red Raiders entered two teams which met head-to-head in the final round finishing first and second. They dominated 33 other teams that represented the top meat science programs at universities from 16 states. The University of Florida’s team was third in the competition.

“This group of students was extremely deep,” said Loni Woolley, the team’s coach and a Texas Tech meat science graduate student. “Their performance is a great reflection of our Department of Animal and Food Sciences.” Previously Texas Tech won the competition in 2003, 2005, 2007, 2009 and 2010. 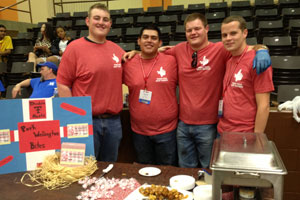 Meanwhile, four Texas Tech students were honored for outstanding academic achievement and leadership in the meat science industry. Hutto and Adams both received American Meat Science Association Scholastic Achievement Awards. Honorary mention was given to and Rode and Dakotah Williams.

Separately, products from each represented university were featured at a Taste of the Reciprocal Meat Conference Contest. Texas Tech received a People’s Choice Award for its Pork Wellington Bites, which were developed by Hutto, Adams, Rode, Williams, Trevor King, Jennifer Martin and Henry Ruiz.

Ruiz was also on the conference’s first place Iron Chef Team. The 10-member group pulled from various universities was given a so-called mystery protein upon arrival at the conference. They were then asked to develop a product using the secret ingredient. Ruiz’s team developed the ‘Bama Slamma,’ a pulled pork slider on donut buns.