Faculty and staff members share the stories behind the U.S. flags they cherish.

At Texas Tech University, the U.S. flag flies high in the center of campus at Memorial Circle. But that isn’t the only flag on campus.

There are others, displayed in the privacy of a faculty or staff member’s office and home. They aren’t as visible as the one at Memorial Circle, but they still have great meaning to their owners. 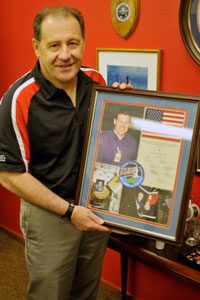 Sacco, dean of the Whitacre College of Engineering, has a framed U.S. flag hanging on his wall. Though small, this Stars and Stripes has logged more miles than your average U.S. flag, because in the summer of 1992 it was aboard the Space Shuttle Columbia.

It serves as a memento from Sacco’s time as a NASA astronaut.

“This is the flag and a patch that flew on STS-50,” he said. “They fly about 30 of them around the crew cabin during the mission. Most eventually are given to political leaders around the world.”

Sacco served this flight as a capsule communicator or CAPCOM. His duties included talking with pilot, Kenneth Bowersox, who would become shuttle commander of Sacco’s own Columbia flight, STS-73, three years later. 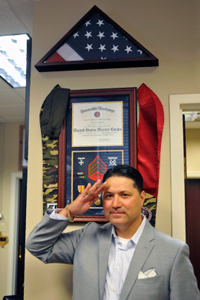 The U.S. flag Muñoz displays is one of the first things you see when you enter his office.

That is no accident.

“I think everyone should have a U.S. flag in their office,” said Muñoz, vice provost for undergraduate education and senior vice president for the Division of Institutional Diversity Equity & Community Engagement.

“Despite the travails we face, this is still the greatest country in the world.”

The flag was given to him by U.S. Rep. and Texas Tech Alumnus Randy Neugebauer in honor of Muñoz’s service in the Marine Corps from 1986-1991. Framed mementos from his Marine Corps service hang below the flag.

“As citizens of the United States, we must all play an active role in keeping and upholding our nation's democracy,” Muñoz said, “and the U.S. flag is a reminder of that obligation.” 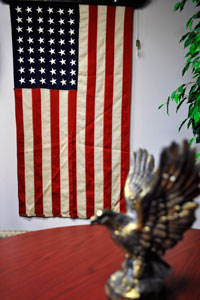 Gentry, director general of Region I University Interscholastic League and associate director for the Division of Institutional Diversity Equity & Community Engagement, displays in his office a flag that belonged to his father, Sgt. Fred E. Gentry.

The flag is from his father’s service in the U.S. Army during World War II. It has 48 stars, and his father’s dog tags hang on the corner.

Sam Gentry also served in the Army during Vietnam as a paratrooper along with his brother.

“My father flew the flag every day that my brother and I were in Vietnam, so now I’m flying the flag for him,” Sam said. 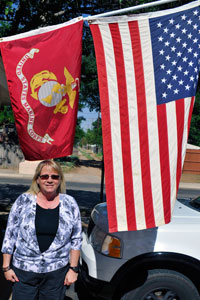 Helbert, a senior academic advisor for the Community College and Transfer Relations office and Marine veteran, is very protective of the U.S. flag.

It symbolizes what a great country the United States is, Helbert said in her West Hall office, which faces the flags at Memorial Circle.

“If I’ve been on campus late when they take them down, I watch them take it down to make sure they don’t touch the ground,” she said. “I want to make sure it’s done properly. That’s just the way I am.”

Herbert flies the U.S. and Marine Corps flags that were given to her and her husband after completing their service.

“Seeing the U.S. flag fly makes me feel at home,” she said. 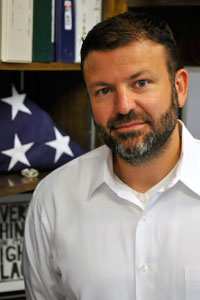 Peaslee, an assistant professor in the College of Media and Communication, displays the U.S. flag he received last September when his father, a Vietnam War veteran, passed away.

“It’s my little reminder of my dad and the sacrifice he made.” Peaslee said.

Peaslee is proud of his dad’s work as a Navy Corpsman in the Vietnam War, and said with more and more soldiers earning the title of veteran Flag Day is as important as ever. He looks at Flag Day as an opportunity to make visible all the work done by U.S. military services.