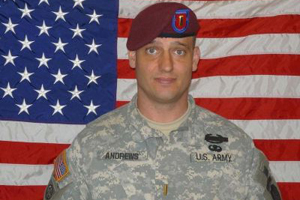 The Texas Legislature recently awarded a deceased soldier and Texas Tech alumnus the Legislative Medal of Honor, which is the highest military decoration that may be awarded to a member of the Texas Military Forces.

Given out to only one person every two years, the legislature posthumously honored U.S. Army 2nd Lt. Darryn Deen Andrews, who was killed in action on Sept. 4, 2009, after his unit was ambushed in Afghanistan. His family was informed of the award on Memorial Day.

“It means to me, more than anything, that it’s for the benefit of his children,” said his father, Robert “Andy” Andrews. “His son was three days short of 2 when Darryn was killed, and his daughter was three and a half months from being born. They basically have no memory of him themselves. So, every honor such as this has a lasting effect and gives them a better idea of what kind of man he was. Your worst fear is he’s done this thing – he’s done sacrificed his life for others – and within a generation, he’s forgotten. You want people to remember him for who he was.”

The Texas Legislative Medal of Honor is awarded to a member of the state or federal military forces who voluntarily performs a deed of personal bravery or self-sacrifice involving risk of life that is so conspicuous as to clearly distinguish the person for gallantry above the person’s comrades, according to the Texas Government Code. Awarding of the medal is considered on the standard of extraordinary merit and is given on incontestable proof of performance of the deed.

Besides Darryn, the award only has been given eight times since 1997.

Serving his second tour in Afghanistan with 1st Battalion, 501st Parachute Regiment, Andy said his son had been diagnosed with a concussion and was on restrictive duty on the day of his death. A week prior, he’d been hurt while riding in a vehicle that encountered an improvised explosive device (IED). He received his second Purple Heart for this event. 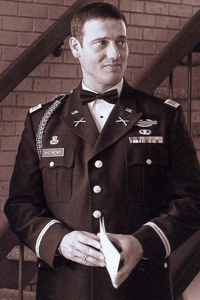 Lt. Andrews was killed while serving his country in Afghanistan.

On Sept. 4, Darryn took himself off of restrictive duty to join his men, who were travelling through dangerous territory, Andy said.

The unit first was struck with an IED and then by small arms fire, including a rocket-propelled grenade (RPG). Darryn threw three of his men to the ground to protect them, according to the Army, but was himself fatally wounded.

“They were trying to figure out how to get the vehicle in front out of a hole,” Andy said. “Darryn saw a guy come from behind a wall with an RPG. He hollered ‘RPG’ and shoved everyone out of the way, but was hit himself. When they informed me of his death, they told me that if he had stayed in the vehicle as most officers did, he wouldn’t have been killed. He was awarded the Silver Star.”

The Silver Star Medal is the third highest military decoration for valor that can be awarded to any person serving in any capacity with the United States Armed Forces. The medal is awarded for gallantry in action against an enemy of the United States.

Darryn was born July 3, 1975, in Ogden, Utah. He graduated from C.H. Yoe High School in Cameron, Texas, and was ready to enlist after graduation, Andy recalled.

“He wanted to join the army right out of high school, but his mother said ‘go to college for just one year,’ and he did,” he said. “So he went to Temple College. Then, he decided he liked it ok. Jarrett, his twin brother, had gone to Texas Tech his freshman year. So, Darryn decided to go to Tech himself and get his degree there in international business.”

Both sons enjoyed their college experience together, said his mother, Sondra. But Darryn always still had the military in the back of his mind.

“He participated in intramural sports, and he loved rugby,” she said. “He and his brother were both Fijis (Phi Gamma Delta Fraternity). He just really immersed himself into the whole student life at Texas Tech. It was a good time.”

After graduating in December 1998, he worked as an international sales manager at Balt International.

“One day, he came home and his high school football coach said ‘why don’t you come and coach for me,’” Andy said. “He coached football two years at Yoe and two for Hurst/Euless/Bedford. Then, 9/11 came along and there he went.” 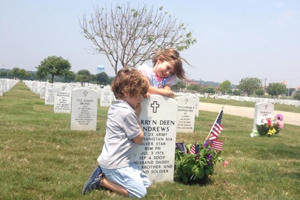 Darryn was killed during his second tour in Afghanistan.

“He had a very strong walk with God,” Sondra said. “He was a good Christian. And he shared his belief with all of his brothers. He was a great dad. He was an amazing son and a good friend.”

He also strived for doing the right thing, Andy said. As an enlisted man when he first joined the Army in 2002, Darryn didn’t agree with what he perceived as elitist differences between enlisted men and officers. He took advantage of the “Green to Gold” to earn his master’s degree in educational administration and become a commissioned officer through the school’s ROTC program, but strived to change the barrier between.

“He just wanted things to be right,” he said. “When he went and enlisted, he saw officers don’t understand the plight of the enlisted man. I can speak about that from personal experience, because I was one. Darryn thought it would be better for everyone if things were done differently, and there was not as much elitism. He wanted to make the Army a better place. He was somewhat idealistic. From testimony of the soldiers in Afghanistan, he tried to do that as much as he could. He didn’t shove an unpleasant task on someone. He’d take it himself. I always told him to do the right thing. And he did.”