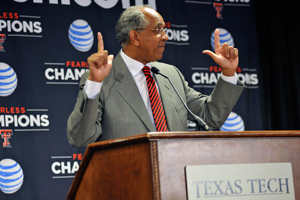 Tubby Smith flashes his "Guns Up" at his introductory news conference.

Smith become the 16th head coach in Red Raider history and brings an impressive resume to Lubbock. In his 22 years as head coach, he has amassed a 511-226 record, won a national championship (Kentucky, 1997-98), and made four Elite Eight and nine Sweet 16 appearances. He has posted 20 or more victories in 19 seasons and has advanced to the NCAA Tournament 17 times.

“The enthusiasm and the passion that the (Texas Tech) leadership showed was just off the charts,” Smith said. “We were really sold right away and were bitten by the bug of excitement and energy.”

“It’s my goal to build this program into one of the top programs, not just in the Big 12 but in the country.”

To view the introductory news conference in its entirety, click here.