Freshman wins raffle to experience hands-on leadership and inside perspective at university. 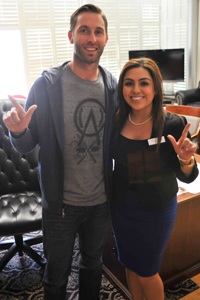 A routine stop in the Student Union Building (SUB) led Christian Reyna to a day-long adventure Thursday through the President’s Office at Texas Tech University.

“A family friend spotted me at the SUB and bought 10 raffle tickets on my behalf,” said Reyna, a freshman from Lubbock.

The raffle was for the “President for a Day” fundraiser for Mortar Board, a national honor society that recognizes college seniors for outstanding achievement in scholarship, leadership and service. The winner would sit-in for Interim President Lawrence Schovanec, while representing his office in various matters of importance to the university.

“I was at work when I got the text message saying I’d won,” Reyna said. “I was so excited that I almost forgot to respond.”

Reyna, with ambitions of becoming a nurse, currently works in the business office of the Emergency Room at University Medical Center. Her position as Texas Tech president, however, is a big departure from her usual duties, beginning with a pass to park in the president’s space outside the Administration Building, followed by a series of meetings with top university officials and the Student Government Association.

“I met so many wonderful people,” Reyna said. “It’s very interesting to see how each position comes together to get things accomplished. I’d never really thought about it before.”

Reyna admits that her favorite items on the agenda were experiencing the perks of the job, which included tours of the United Spirit Arena and Jones AT&T Stadium.

“I would have to say meeting Coach Kliff Kingsbury is what I looked forward to most,” Reyna said. “This isn’t a job I could do every day, but maybe for a little while.”