Their findings could help determine whether to protect the bird as threatened under the Endangered Species Act. 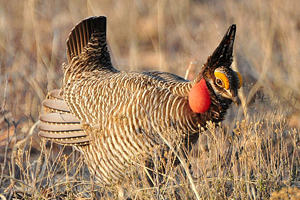 The lesser prairie chicken is now found only in restricted areas of five states in the southern Great Plains: Colorado, Kansas, Oklahoma, New Mexico and Texas.

Texas Tech University scientists have been at the forefront of research on the lesser prairie chicken (LPC), a prairie grouse native to the West Texas landscape, for more than three decades.

Now their research and that of other universities could be square in the middle of an ongoing debate whether to protect the bird as threatened under the Endangered Species Act.

The U.S. Fish and Wildlife Service agreed to hold another public comment period this spring before voting on the issue Sept. 30.

Along with their Texas-based studies on breeding, predation, survival and microclimate, Texas Tech researchers also collected more than a decade’s worth of data from New Mexico. Additional research out of Oklahoma and Kansas has indicated lesser prairie chickens have an aversion to tall vertical structures, such as wind turbines and power lines, findings that could affect the oil and gas industry as much as farmers and land owners.

Pieces of the puzzle

The researchers’ part of this complicated puzzle is to provide information on the status of the species, not comment on policy, said Clint Boal, professor in the Department of Natural Resources Management and assistant leader of the USGS Texas Cooperative Fish and Wildlife Research Unit. He has been involved in LPC research since 2007; prior to that, Dave Haukos, a former Texas Tech professor now at Kansas State, had been conducting studies at Texas Tech since the 1980s.

The bird is now found only in restricted areas of five states in the southern Great Plains: Colorado, Kansas, Oklahoma, New Mexico and Texas. 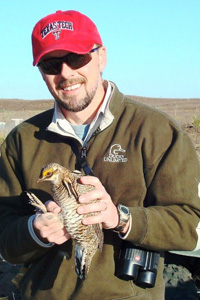 About tall structures, Boal explained the structures may provide perches for predators or the dislike is simply a response to a structure on landscape that wasn’t there in their evolutionary history. Hence the prairie chickens tend to stay away from areas where there are tall structures.

Blake Grisham, a post doctoral research associate working with Boal, said in terms of wind farms, companies already have been trying to do the right thing by staying away from known habitats.

“We’ve been lucky in terms of where wind farm hot spots are located,” Grisham said. “Those spots do occur, where they overlap with the distribution of the lesser prairie chickens; we’ve been fortunate that the wind energy companies have identified these places as potential problems and have tried their best to avoid these areas.”

Boal said other aversions for LPC are manmade structures and landscape changes. Nesting hens will avoid nesting near manmade structures and disturbances in habitat, from roads to buildings, to the conversion of native grasslands to cropland. Boal said prairie chickens for example, are not very likely to use cotton fields to nest in or for lekking (places where males aggregate to try to attract females to mate with).

“Prairie chickens have evolved in this landscape,” Boal said. “They have a breeding strategy that is suited to this landscape, a boom-and-bust kind of cycle where they have high survival from year to year but reproduction is highly variable; if you have a good year for reproduction, enough new birds enter the population and have a survival rate that carries them through three or four bad years before they have another good year.

But, Boal said part of that equation is a landscape where the chickens have a lot of habitat. If the prairie chicken has a bad year, they may have to expand their home range and forage over a greater area. The problem is, in the current landscape, compared to 50 or 100 years ago, they don’t have all that area to flow over. A lot has been converted to agriculture. Much of that area has been taken completely out of what has been habitat for them.

“You have some of those areas that, because of petroleum extraction, stockyards, or other human activity, the chickens just won’t use,” Boal said. “Because we’ve pieced up the habitat so much, I suspect that is no longer advantageous for them because they need to move around to look for more food, but there’s no place to look – unless they cross somewhere they perceive as a danger zone. 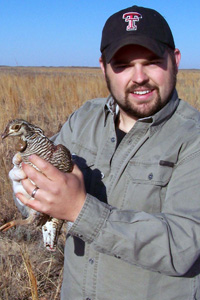 “As we go forward with conservation plans and the relative risk that a species is facing, we need to look at those risks across its distribution, not just have a one-size-fits-all for the prairie chicken’s entire distribution.”

The importance of paying attention to species reduction, Grisham said, is really a much larger picture.

“The state of the lesser prairie chicken is an indicator of prairie health,” he said. “A general decline shows that the ecosystem as a whole faces uncertainty and that other species may be affected in the future.”

If the LPC is added to the threatened list, it will restrict some land uses, Boal said. However, if landowners and producers – farmers and ranchers – have previously entered one of many cooperatives established by state and federal wildlife conservation agreements– which are managed by Texas Parks and Wildlife, they can continue whatever practices are already in place and are protected from some of these restrictions.

“What people need to understand is that it’s not just prairie chickens. It’s really the inter-connectedness of these biotic communities,” Boal said. “When we have indicators like a prairie chicken, and there’s something going wrong, that’s an indication of that biotic community as a whole. We need to think about, ‘what is the world we want to live in?’

When you talk to landowners around here, they rhapsodize about how they love the land, and the relationship they have with the land. They say they want to be good stewards of the land, and I believe them. Prairie chickens are an important component of that land, and their future depends on the quality of stewardship they receive.”