Jian Sheng was part of a team that explains how the tiny organisms survive despite their size. 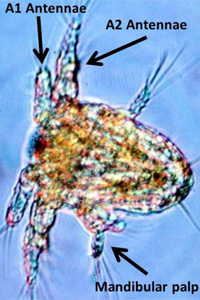 Understanding plankton and their ability to respond to changes in the environment could have direct implications into understanding the future health of our oceans.

Imagine trying to swim through a pool of honey. Because of their small size, this is what swimming in water is like for tiny marine plankton. So, it was often assumed they would be easy prey, especially in the dense viscosity of colder waters, but that is not necessarily so.

Texas Tech Associate Professor and Whitacre Endowed Chair in Mechanical Engineering Jian Sheng, along with biologists Brad Gemmell and Edward Buskey from the University of Texas Marine Science Institute, have discovered new information that explains how these tiny organisms overcome this disadvantage.

Their paper, titled “A compensatory escape mechanism at low Reynolds number” was published in the current issue of Proceeding of the National Academy of Science.

“The purpose of the study was in trying to determine the effects of climate change at the very base of the food chain,” Sheng said.

As one of the most abundant animal groups on the planet, many species, including many commercially important fish species, rely on planktonic copepod nauplii at some point during their life cycle. Understanding the ability of these animals to respond to changes in the environment could have direct implications into understanding the future health of our oceans.

“At 3,000 frames per second, it was like tracking a racecar through a microscope,” Sheng said. “We were able to determine that the plankton adapted to changes in viscosity by altering the rhythm of its pulsing appendage.”

The response, built in to its natural muscle fiber, was only triggered by changes in temperature, Sheng said. It could not compensate for changes in viscosity due to environmental pollution, such as algae blooms or oil spills.