As part of National Eating Disorder Awareness Week, former track star talks about her past struggles.

Leigh along side her husband, Nick Cordes.

Leigh Daniel Cordes is a familiar name in Lubbock.

The Texas Tech alum and track star was the university’s first track and field national champion and married her husband on live television in front of an audience of 6 million.

However, her struggles with multiple eating disorders during her youth are often overlooked. Having overcome them, Leigh has been an advocate for healthy body image awareness by helping young women dealing with eating disorders. She shared her own story during National Eating Disorder Awareness Week.

“These girls are so bright, they have every talent in the world, they are so beautiful, and it breaks my heart to see them dealing with these issues,” Leigh said. “Once you have an eating disorder, it’s something that you always have to battle.”

During her freshman year in high school, Leigh’s parents told her they were getting a divorce. As the eldest of four children, she says the divorce rocked her world as she tried to find a way to deal with the news.

“I began to restrict my eating, and in the midst of all the turmoil that my family was facing, it really gave me a sense of balance and control,” Leigh said. “And really that’s what a lot of people with disorders deal with … it has very little to do with wanting to be thin.”

How it all Started

Leigh began counting calories, despite being at a healthy weight. Once friends and family members started to notice how frail she had become, they began to monitor her eating. This led to binging and purging, as she tried to cope with her changing family life and eating disorder.

After struggling with bulimia for about a year, Leigh collapsed while at a pool with friends. She was rushed to the hospital, where doctors told her parents she was very lucky to be alive. Leigh’s parents sent her to an in-patient facility in San Antonio, where she continued to fight her disorder. 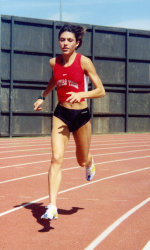 Two years after taking up running in high school, Leigh received a scholarship to Texas Tech.

“I pretty much just lied to the counselors and to myself the first six weeks, and I begged for them to send me home,” she said. “Eating disorders tend to attract a very strong-willed type of girl, so it’s good and bad; it takes a certain kind of resolve to have one.”

Leigh said she hit rock-bottom at the facility, and credits her faith for ultimately restoring her wellness.

“I remember thinking to myself: Do you want to look back on your life and this is what it is going to be, do you want to die? Once I looked up it was like I had seen a whole new light for the first time in two years, I didn’t want to live that life.”

After receiving treatment, Leigh and her family knew that preventing a relapse was crucial. At Monterey High School, she got back in athletics, helping her to transition into an atmosphere of positive body image.

“It was really my saving grace, to go back and have such a positive environment with teammates and coaches, so that really helped me,” Leigh said. “You cannot be a good athlete without fueling your body. It’s just really impossible.”

Leigh was asked by the track coach her junior year to try out for the team. She turned out to be a gifted long-distance athlete and did so well she was offered a scholarship to run for Texas Tech.

“I loved the way running made me feel—so strong and powerful and free. It was just something that I fell in love with right away and I enjoyed doing well,” Leigh said.

As a junior at Texas Tech, Leigh won the 5,000 meters at the 1999 NCAA Indoor National Championship, becoming the school’s first track and field national champion. Just a few months later at the 1999 NCAA Outdoor National Championship, a competitor stepped on Leigh’s shoe in the first few laps of the 10,000 meters, forcing her to stop and re-tie the shoe before chasing down her competition to win her second national title.

Throughout her athletic career, Leigh says the support of her team and increasing knowledge about how to be a successful athlete helped keep her eating issues in check.

“I had great coaches who wanted us eating well, eating right, never starving yourself,” Leigh said. “I had very healthy teammates who had very healthy mindsets and treated their bodies well. Being around them kept me motivated to be healthy and treat my body right all throughout college.” 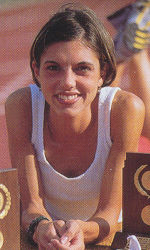 Leigh won both an indoor and outdoor NCAA national championship in 1999.

Today, Leigh is often asked to work with young women in their own struggles with eating disorders.

“I really encourage girls with eating disorders to find something that they love that they won’t become obsessed with, such as joining a basketball team or getting a bike,” Leigh said. “Do something that is good for your body that you love to do.”

Thanks to her athletic endeavors, Leigh now understands how to adequately fuel her body and make the right food choices. She says the key is moderation, and that people should not fear becoming overweight from eating pizza or ice cream every once in a while.

In 2009, Leigh and her now-husband Nick Cordes were chosen as the winning couple to have their wedding televised live during the “Today” show. Nick, also a runner, works at Texas Tech in the Office of Community Engagement. They have a 10-month-old daughter.

“For my daughter I certainly will protect her and promote a healthy body image for her as much as I can,” Leigh said. “I actually have seen a shift in the last 10 years, and now there are many celebrities who are curvier role models for young women.”

Leigh works at Cardinal’s Fitness Center where she teaches boot camps, does personal training and leads a running club. She says the most important thing for people of all ages is to find their best body by eating healthy and exercising, but not going to extremes.

“Try to give yourself positive affirmations and be realistic about your body,” Leigh said. “If you have to go to extremes by eating too little or exercising too much, that is not your best body, and you can’t possibly sustain it.”

For now though, Leigh says she knows she is fortunate to be healthy, an athlete, and a mother.

“As I got older, I started to love myself more,” Leigh said. “I’m so happy to have a healthy body and a more realistic view on life and what a healthy body can do for me.”

Texas Tech’s Feed Your Body and Soul Committee is hosting a series of events to promote awareness about eating disorders, body image and soulful living this week. For more information and for a full list of event, visit http://counseling.ttu.edu.