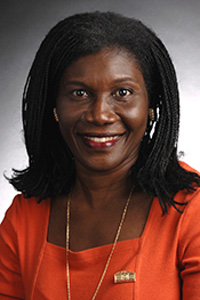 A Texas Tech University College of Education associate professor has been elected to serve as the Regional Vice President of the Southwest for Sigma Delta Pi, the National Collegiate Hispanic Honor Society, for the 2013-16 triennium beginning in July.

Comfort Pratt will assist institutions in the southwest region with membership, recruitment, chapter reactivation and general consultation. She will also serve as a member of Sigma Delta Pi’s National Executive Council.

“This is very important to me and our chapter,” Pratt said, “because I will now be a member of the National Executive committee which is the decision-making body of the society nationwide. This means Texas Tech will now play a very important role in the society.”

Pratt currently serves as advisor of the Texas Tech chapter of Sigma Delta Pi and as director of the organization’s national graduate research grant competition.

The society not only serves as a form of recognition for academic achievement, but also allows students to use their knowledge and skills to foster literacy and cultural enrichment in the Texas Tech community.

Sigma Delta Pi, established in 1919 at the University of California, Berkeley, honors those who have completed three years of study of college-level Spanish, including at least three semester hours of a course in Hispanic literature or Hispanic culture and civilization with a minimum grade point average of 3.0 in all Spanish courses taken. Candidates must also rank in the upper 35 percent of their class and must have completed at least three semesters of college work.