The system has crossed the mark nearly a year ahead of schedule. 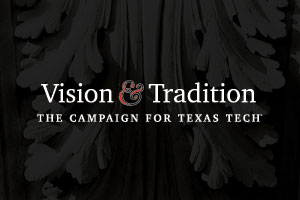 A record in itself, the $1 billion goal was reached through a broad base of support and an unprecedented number of donors.

Officials at the Texas Tech University System announced today (Feb. 8) that its capital campaign and most ambitious fundraising effort has crossed the $1 billion mark nearly a year ahead of schedule.

Vision & Tradition: The Campaign for Texas Tech surpassed its $1 billion goal with the support of more than 120,000 generous donors, making it the most successful capital campaign in the history of the Texas Tech University System.

“This is a historic moment for the Texas Tech University System,” said Chancellor Kent Hance. “Surpassing the $1 billion milestone nearly a year ahead of schedule is a remarkable accomplishment and a direct testament to the overwhelming support from our loyal donors. So many people have contributed to the success of this campaign, and we cannot thank you all enough.”

A record in itself, the $1 billion goal was reached through a broad base of support and an unprecedented number of donors. Donations to the Vision & Tradition campaign came from 39 countries and all 50 states.

“From the very beginning, the Vision & Tradition campaign has been driven by people who care deeply about our universities,” said Kelly Overley, vice chancellor for institutional advancement. “Every gift that helped us achieve our historic goal represents an investment that is creating a lasting legacy. Thanks to the generous contributions from our supportive donors and our devoted fundraising team, this campaign has far exceeded expectations.”

View photos from the event on the Vision & Tradition website>>

Gifts to the Texas Tech University System are designated solely and completely to whatever cause the donor chooses and are supporting student scholarships, faculty endowments, research efforts and facility improvements, among many other areas.

Additionally, nearly $315 million is being invested in campus development through the construction of spaces where students and faculty can learn, discover and compete. Approximately 20 buildings were built, renovated or are currently under construction thanks to the campaign, and four academic programs have been named in the honor of significant contributions.

“The impact of the Vision & Tradition campaign will be felt for generations,” Hance said. “Raising $1 billion is a significant achievement, even in a good economy, and has put us into an elite group of higher education institutions.”

Vision & Tradition: The Campaign for Texas Tech will continue through the end of the current fiscal year and conclude Aug. 31, 2013. The total amount raised will be announced at the completion of the capital campaign and a final report detailing the success of the Vision & Tradition campaign will be available in the months following its completion.

“Although we have reached our goal, we are not finished yet,” Hance said. “There is still time to be part of the Vision & Tradition campaign, and even once it’s finished, we will continue to raise money for a greater future for the Texas Tech University System.”