It has been 20 years since Sheryl Swoopes and Texas Tech took the country by storm. 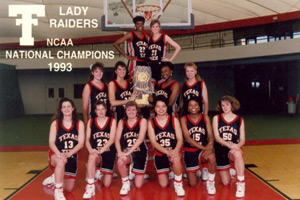 The 1993 national champion Lady Raiders won their last 19 games of the season.

As the reporter from Atlanta arrived at the heart of the Texas Tech campus, he was surprised by its emptiness. He was assigned to visit the West Texas town so many across the country had never heard of, and the university that was on the verge of claiming the 1993 NCAA women’s basketball championship in Atlanta.

How would the people of Lubbock respond to their team’s improbable run to the top? How would students react to the school’s first national championship?

Yet, here he was, on April 4, 1993, parked near Memorial Circle, sitting on the hood of his car and listening to the final seconds of the game’s radio broadcast without a single person around.

“It was so quiet, he could hear the birds chirping,” said former Texas Tech women’s basketball coach Marsha Sharp, recalling the story told to her by the reporter 20 years ago. “But as soon as the game finished and the final score was announced, it was complete chaos. He said students came pouring out of what seemed like every dorm and building, running toward Memorial Circle. Apparently, they had been watching the game on TV and came rushing out to celebrate.”

The celebration continued two decades later, as all members of the championship team returned to Lubbock on Feb. 17 for a reunion celebrating the 20th anniversary of the milestone. They were honored at halftime of Texas Tech’s game against Texas. 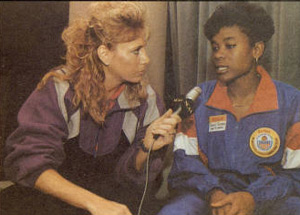 Sheryl Swoopes is interviewed by Nancy Lieberman, who in 1993 worked as a TV analyst.

The reunion is sure to spark memories for the team and fans. It also serves as a reminder of how much that championship – still the only national title won by a Texas Tech athletic team – impacted the university then and now.

“I truly believe that our championship changed the face of women’s basketball,” said Krista (Kirkland) Gerlich, a senior guard on that team. “We were the underdog who surprised everybody, and we had Sheryl Swoopes. You would be hard pressed to find another championship team that did more for its community and put Texas Tech and Lubbock, Texas, on the map.”

Nancy Lieberman agrees. The longtime basketball player, coach and hall of famer, served as a television analyst for many Texas Tech games in 1993. She also was in Atlanta to witness the Lady Raiders and “Swoopla” enthrall the country.

“There are some poignant moments scattered all over sports history, and the Lady Raiders certainly were a part of that,” she said. “It was the first time a women’s Final Four was sold out, and they were a big reason why. They just captivated the national audience because they represented everything West Texas is about: they’re weren’t jerks, they had a nice coach and just played really hard.”

The team had quite the effect on Texas Tech and Lubbock, as well. A welcome-home celebration was scheduled for the night following the championship game, and officials chose Jones Stadium as the setting because it could hold more fans than the Lubbock Municipal Coliseum (capacity 8,500), where the Lady Raiders played their home games. When the Lady Raiders drove down the ramp and onto the field in limousines, more than 40,000 fans awaited them. 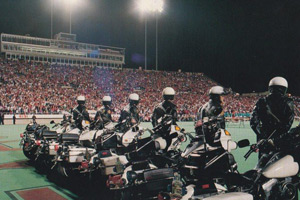 A police escort awaits the Lady Raiders during their celebration at Jones Stadium the day after Texas Tech won the national championship.

“It was unbelievable,” Sharp said. “I don’t think we all really understood how special winning the championship was until we saw the fans that night. Even now, it’s unheard of at the college level to have 40,000 fans come out to celebrate a championship.”

Finally reveling with fans was icing on the cake for Gerlich, who always regretted not being able to partake in the campus celebration immediately following the game.

“Don’t get me wrong, we celebrated together in our own way (in Atlanta), but we also wanted to be back on campus to celebrate with the students,” she said. “We got phone calls back at the hotel telling us how crazy it was. That cars were bumper to bumper and people were swimming in the fountains. We basically missed the best party ever on campus.”

They still were treated like celebrities when they resumed classes that spring. Gerlich remembers being congratulated almost every day by students and professors, and feeling tremendous pride every time she encountered a fan. 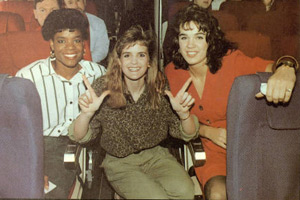 The Lady Raiders were led in 1993 by the senior trio of Sheryl Swoopes, Krista Kirkland and Cynthia Clinger.

“Even to this day, there are people who remember Texas Tech for that championship,” said Lawless, who served as president from 1989-1996. “You can’t really measure the amount of publicity a national championship brings to your school. Every time we played in a NCAA Tournament game, it seemed like the TV announcers were explaining where Lubbock was because a lot of people had never heard of Texas Tech or never paid attention to Texas Tech.

“Plus, we were the underdog, so a lot of people were rooting for us. We just continued to win and knock off these big-name schools one by one, and a lot of people loved that.”

Sharp remembers receiving congratulatory phone calls and letters from complete strangers all over the country, most of them mentioning how thrilling it was to see the Lady Raiders’ improbable run to the top of women’s basketball.

And then of course, there are those associated with Texas Tech. To this day they’ll stop Sharp to reminisce.

“I’ll be at an airport somewhere or some event, and someone will come up to me and say, ‘I graduated from Texas Tech in 1993, so I was there,’” Sharp said. “And that’s exactly how they’ll say it: ‘I was there.’ And I’ll know exactly what they mean. It was a real special time for all of us.”